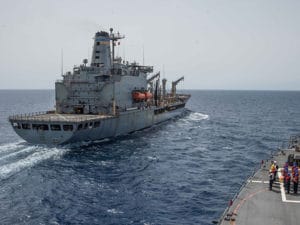 Alabama Shipyard LLC, Mobile, Ala., has been awarded an $8,698,054 firm-fixed-price contract for a 75-calendar day shipyard availability for the mid-term availability of the Military Sealift Command (MSC) fleet replenishment oiler USNS 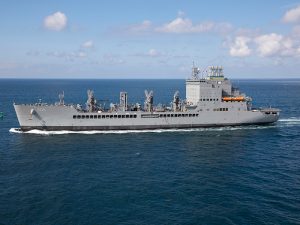 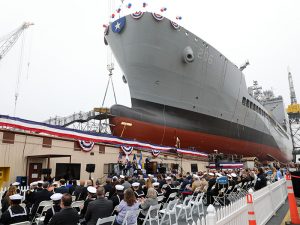 The General Dynamics NASSCO shipyard in San Diego christened and launched the future USNS Harvey Milk (T-AO 206), November 6. The ship is the second in the U.S. Navy’s John Lewis-class fleet 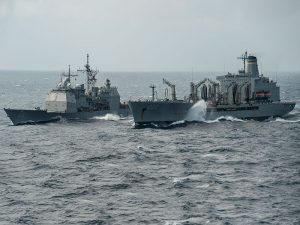 Vigor Marine LLC, Portland, Ore., has been awarded a $21,543,401 firm-fixed-price contract for a 76-calendar day shipyard availability. The work to be performed provides services for the regular overhaul availability and dry-docking 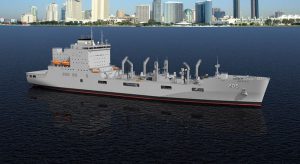 AUGUST 2, 2016 — Fairbanks Morse, an EnPro Industries company (NYSE: NPO), is to supply the main propulsion diesel engines for the USNS John Lewis, the lead ship in the U.S. Navy’s 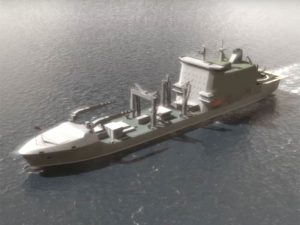 MAY 12, 2016 — Chantier Davie Canada Inc. has released a video that, it says, is first in a multi-episode series about Canada’s next Auxiliary Oiler Replenishment Ship. The ship is being 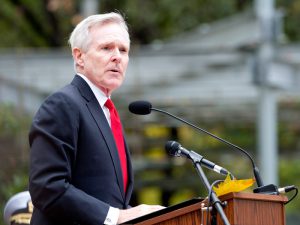 JANUARY 7, 2016 —In a ship-naming ceremony held at the Cannon House Office Building in Washington, DC, yesterday, Secretary of the Navy (SECNAV) Ray Mabus announced Jan. 6 that the first ship 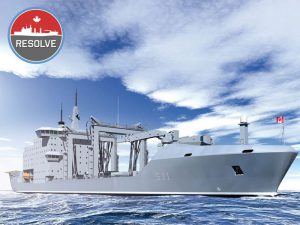 The project will see the Quebec shipbuilder continue with the conversion of a containership into an interim fleet oiler for the Royal Canadian Navy. Until now, Davie has been working on the basis of an letter of intent from the previous government.

Timely continuation of the project was put in doubt when rival Irving Shipbuilding wrote letters to members of the incoming cabinet asking that its alternative solution be considered. That move provoked a lot of unhappiness among the rest of the Canadian shipbuilding community.

The Government of Canada was recently briefed on the interim auxiliary oil replenishment file. We know that this process commenced as a result of an expression of interest by Chantier Davie Canada Inc. We also know that the previous government made a decision to proceed with this proposal through a sole-source rather than a competitive process. The previous government also modified the long-standing procurement rules governing contracts for interim defence requirements.

We have taken time to assess all these facts and have also taken the following into consideration:The process is at an advanced stage. If we restarted this initiative by launching a competition, we would lose precious time in providing the Navy with a critical refuelling and naval support capability.

The ship has been purchased by Chantier Davie Canada Inc. and is in the shipyard undergoing conversion.

According to public reports, several hundred employees have already been hired.

Due to the structure of the agreement entered into by the previous government, we will be required to pay up to $89 million in expenses should we not proceed with this initiative.

After amassing the facts and carefully deliberating, The Government of Canada determined that proceeding with Project Resolve is the most viable course of action to provide the Navy’s at-sea oil replenishment capability until the Joint Support Ships, to be built by Seaspan’s Vancouver Shipyards, are operational. The Government of Canada is committed to ensuring that competitions for major military procurements stand up to the highest standards of openness and transparency.

Furthermore, The Government of Canada will undertake a review of the process for sole-source contracts for military procurements, including looking at current regulations and policies and those regulations amended by the previous government.
vailability of RCN ships has increased in the immediate term with the completion of the first modernized frigates and now that the Victoria-class submarines have achieved a steady state level of readiness, and will further increase in the short-term with interim AOR capability and in the medium-to-longer term with the Joint Support Ships, Arctic/Offshore Patrol Ships, and Canadian Surface Combatants that will be delivered as part of Government shipbuilding. 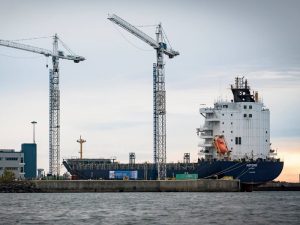 NOVEMBER 24, 2015 — Canadian shipbuilders are embroiled in a spat over the Resolve-Class AOR interim fleet oiler being created by Chantier Davie Canada Inc. by converting a 183 m containership to