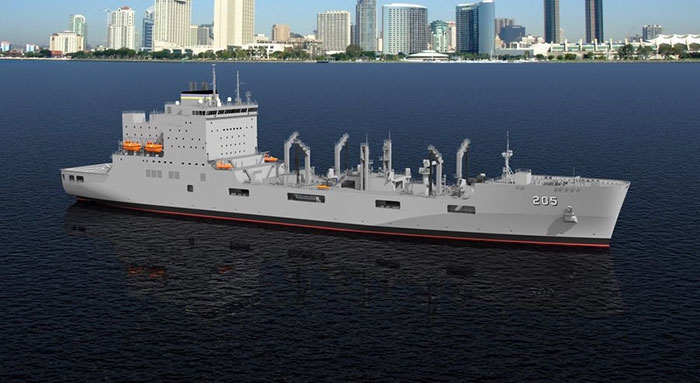 The ship will be powered by two FM-MAN 12V 48/60 CR engines, which will be built by Fairbanks Morse in Beloit, WI. The engines, rated at just over 19,000 bhp each, will be equipped with common rail fuel injection and engine control systems, and will meet the latest emission requirements with an exhaust gas after-treatment system.

Fairbanks Morse will also provide propulsion control systems, auxiliary equipment and commissioning services.The John Lewis is the first ship in its class and will be built by General Dynamics National Steel and Shipbuilding Co. (NASSCO) in San Diego.

“This provision has provided Fairbanks Morse and others who manufacture in the U.S. an opportunity to compete fairly for defense related work,” he said. “In addition to ensuring U.S. investment in critical portions of the U.S. shipbuilding industry, the domestic manufacture requirement provides the Department of Defense with confidence that the manufacturing industrial base will maintain its integrity far into the future.”

At present, the U.S. Navy has ordered six of the new Lewis class ships, pending appropriations, to be built over the next six years. Ultimately the program will include 17 ships, constructed over the next 17 years.