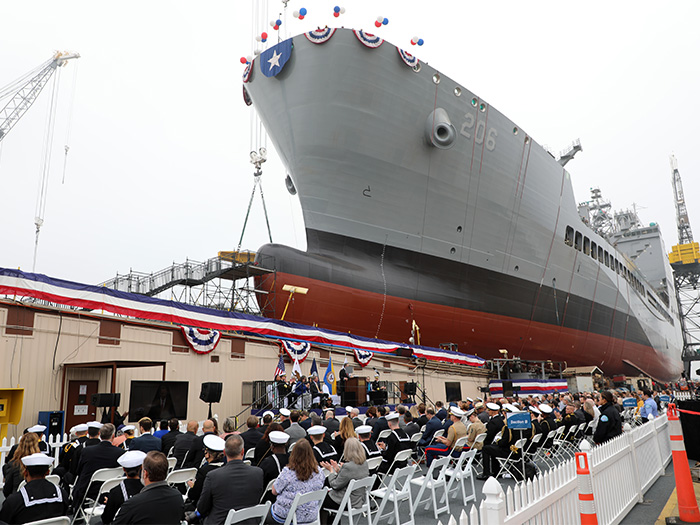 Former Secretary of the Navy Ray Mabus declared that the John Lewis-class of oilers be named after leaders who fought for civil and human rights. This second of six ships in the class honors Harvey Milk, human and civil rights activist who dedicated his life advocating for equality and who served in the Navy during the Korean War as a diving officer. After his naval career, he was elected to the San Francisco Board of Supervisors in 1977, becoming the first openly gay elected official in California. Milk was assassinated on November 27, 1978.

Stuart Milk, nephew of the ship’s namesake and co-founder and president of the Harvey Milk Foundation, served as the principal speaker at the ceremony.

“Leaders like Harvey Milk taught us that diversity of backgrounds and experiences help contribute to the strength and resolve of our nation,” said Secretary of the Navy Carlos Del Toro. “There is no doubt that the future Sailors aboard this ship will be inspired by Milk’s life and legacy.”

U.S. Senator Dianne Feinstein (D-Calif.) and Paula Neira, Navy Veteran and Clinical Program Director of the Johns Hopkins Center for Transgender Health were the ship’s sponsors. Prior to launching the 742-foot-long ship down the ways, Ms. Neira christened the ship with the traditional champagne bottle break alongside the hull

In June 2016, the Navy awarded a $3.2 billion contract to General Dynamics NASSCO for the detailed design and construction of the next generation fleet oilers. The contract calls for the design and construction of six 742-foot-long oilers with a full load displacement of 49,850 tons. Designed to transfer fuel to U.S. Navy carrier strike group ships operating at sea, the oilers have the capacity to carry 157,000 barrels of oil, a significant dry cargo capacity, aviation capability and up to a speed of 20 knots. The John Lewis-class ships will replace the current T-AO 187-class fleet replacement oilers. The Navy plans to acquire 20 ships in the class.