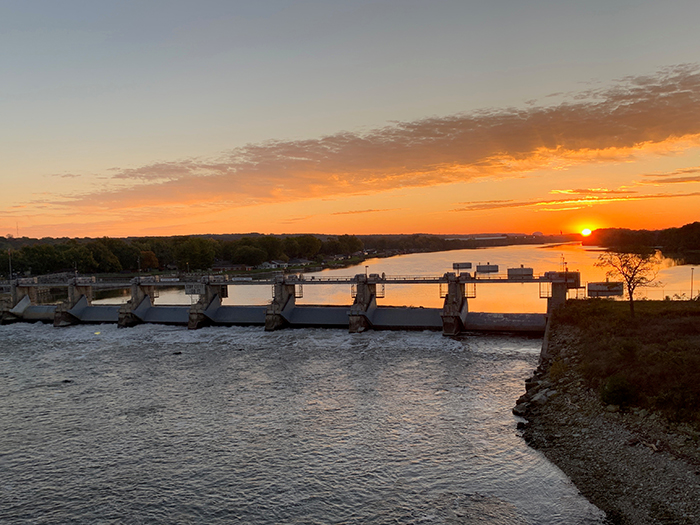 Operators and stakeholders of the Illinois Waterway—and its eight locks and dams connecting Lake Michigan and the Mississippi River—are about six months away from a lengthy waterway closure, writes Marine Log contributor Jack Dupré. During this period. the U.S. Army Corps of Engineers will conduct major maintenance work at five of the locks.

At present, the Corps is planning to conduct major maintenance and rehabilitation work for LaGrange, Peoria, Starved Rock, Marseilles and Dresden Island locks and dams, with simultaneous closures beginning the first week of July and extending three to four months, depending on the location.

The Corps had originally planned to close Brandon Road Lock and Dam during the July-to-October timeframe, but that work has now been postponed. The Corps already has upper miter gate installations for Brandon Road and Dresden Island locks on the schedule for 2023.

According to the current schedule, LaGrange Lock and Dam will undergo a full closure between July 1 and September 30 for major rehabilitation and lock machinery replacement, including hydraulic actuators for the existing miter gates. LaGrange Lock, located about 80 miles above the confluence of the Illinois and Mississippi rivers, opened to navigation in 1939.

The 81-year-old LaGrange Lock, along with the other Illinois Waterway locks, measures 110 feet by 600 feet. LaGrange provides vessels a maximum lift of 10 feet. Just over 27 million tons of cargo passes through LaGrange Lock annually (three-year average between 2015 and 2017), which makes LaGrange the busiest lock on the waterway. Major commodities include food and farm products (fertilizer), chemicals and petroleum products, and manufactured goods. LaGrange was last dewatered in 1987 and has never undergone a major rehab.

Peoria Lock and Dam is scheduled to undergo dewatering for routine maintenance and inspection, with the closure planned to last from July 6 to September 30. Located at mile 157.7 above the Mississippi River, Peoria Lock and Dam opened in 1939 and was last dewatered in 1987. Peoria and LaGrange both feature moveable wicket dams which can pass traffic when water levels are sufficient.

Marseilles Lock and Dam is set to receive a new upper miter gate during its closure, which is forecast to last from July 6 to October 29. While the State of Illinois began construction on Marseilles Lock and Dam in 1920, the federal government eventually took over the project, with most of the lock completed in 1923 and the dam finished a decade later. Marseilles was last dewatered in 1995 and has never had a major rehabilitation. G&G Steel fabricated the new miter gates for both Marseilles and Starved Rock. The Rock Island District said the new gates are vertically-framed rather than the original horizontally-framed miter gates. Vertically-framed gates can be pulled “in the wet,” allowing for easier maintenance.

Finally, Dresden Island Lock and Dam will undergo a partial closure between July 6 and October 3, a 3-week full closure beginning October 4, then another partial closure from October 25 to October 28, all for upper bulkhead recess installation. Located at mile 271.5 on the Illinois Waterway, Dresden Lock opened to navigation in 1933 and was last dewatered in 1995. Dresden has never had a major rehab.

The Corps has no work scheduled for T.J. O’Brien and Lockport locks at this time, with both receiving major rehabilitation work in 2014 and 2016, respectively.

The Corps notes that, with sufficient flows, navigation could continue through LaGrange and Peoria locks and dams, thanks to their moveable wicket dams. The closures will not affect normal pools along the Illinois Waterway. Work at the six locks and dams will be conducted by a combination of Corps of Engineers crews and contractors. AECOM has the construction contract for LaGrange. Alberici will conduct contract work at Starved Rock and Marseilles locks. JF Brennan is the contractor for Dresden.

Allen Marshall, chief of corporate communications for the Rock Island District, said the waterway closure will be worth the incumbrance for operators in the long run.

“These closures were extensively planned and coordinated for more than three years,” Marshall said. “There was a consensus among river carriers that one set of extended closures of the locks was preferable to several different closures spread out over a period of years. This consolidated closure gives river carriers the advanced notice and planning capability that can enable them to mitigate the effects to their industry.

“The work that will be done during these closures is critical to ensuring this aging infrastructure, which is vital to the national and global economy, remains efficient,” Marshall concluded.