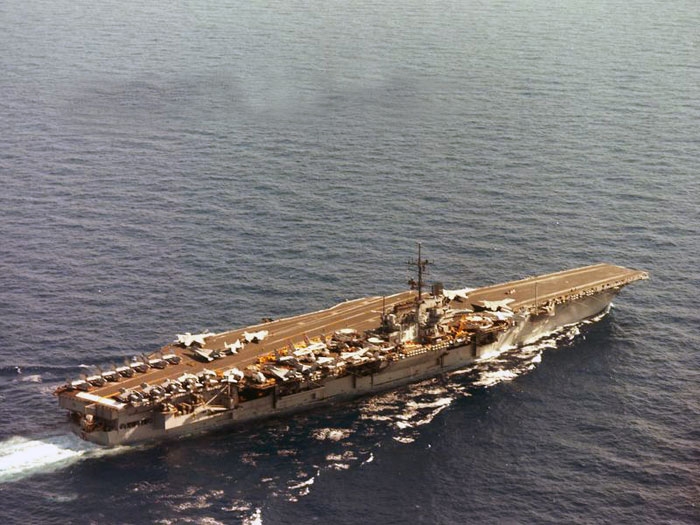 U.S. Navy photo of the USS Saratoga underway in the Red Sea in 1985

AUGUST 22, 2014—The final voyage of the Saratoga got underway yesterday, as the distinguished aircraft carrier began her tow from Pier 1, Naval Station (NAVSTA) Newport, Newport, RI, to her final destination at ESCO Marine, a dismantling facility in Brownsville, TX.

According to the U.S. Navy, the ex-USS Saratoga (CV-60) arrived in Newport on Aug. 7, 1998, following 38 years of commissioned service from 1956 to 1994. Just prior to arrival at what was then the Naval Education and Training Center in Newport, the ship had spent four years in storage at the Philadelphia shipyard.

The 888 foot long conventionally powered Saratoga, the second carrier of the Forrestal class, completed 22 deployments during her career, including the service off the coast of Cuba during the Cuban Missile Crisis in 1962 and in the Persian Gulf in support of Operations Desert Shield and Desert Storm.

“It’s sad that she could not be turned into a museum,” says Darryl Fern, 51, of Tatamy, PA. Fern, a member of the USS Saratoga Association, was videotaping from the shoreline as the commercial tugs guided her into the main channel of the bay. He served as an electrician’s mate second class aboard the Saratoga, 1982-1984.

“Like all the other older carriers, it’s time for her to meet her demise,” he says.

The pier was leased to the State of Rhode Island for a period of time and remained vacant of ships between 1992 and 1998 until the Saratoga arrived.

The Navy competitively awarded the contract May 8 to ESCO Marine for the towing, dismantling and recycling of conventionally powered aircraft carriers stricken from the Naval Vessel Register.

As part of the planning process for the relocation, teams from Naval Sea Systems Command Inactive Ships and ESCO Marine arrived at NAVSTA Newport to assess the condition of the vessel and prepare the work plan.

Mother Nature was determined to have her way with this operation. It was verified that a pair of Peregrine falcons had yet again decided to start a family in a nest adjacent to the elevators on the ship and, after consultation with the U.S. Department of Fish and Wildlife, any movement plans were put on hold until after Aug. 15 to be certain that any fledglings would have ample time to learn to fly and move elsewhere.

On Aug. 13, after viewing long range forecasts and performing final equipment checks, the date was set to relocate the ship Aug. 20.

NOAA meteorologists checked the forecast throughout the Atlantic seaboard since the ship would depart Newport then head south to Florida and into the Gulf of Mexico prior to her final destination. A low-pressure system off the coast of West Africa caused the original plan to be delayed for safety.

On the original day of the movement, the teams met again at 4 p.m. for an extensive review of weather patterns. A decision was made to re-evaluate the forecast at 2 a.m.

Checking that forecast proved the “go” for the operation as the weather system that was a concern for the tug captain appeared to be weakening.

At 5:30 a.m. on Aug. 21, the movement team arrived on station with the tugs arriving at 5:55 a.m., a safety brief was completed and the lines began to be pulled up alongside the ship to hold her on the pier as the Anaconda Lines, bow and stern chains and other tethers were disconnected.

By 7:30 a.m. the last of the two tugs had arrived on site from Providence, the pilots were on board the ship and the mooring lines at the stern were released to clear the way for the last tug to make the stern connection.

By 7:40 a.m. the last line was dropped and the connection that this ship has held to Newport for more than 16 years was severed.

The tugs took control of the ship and eased her out to the middle of Narragansett Bay’s main shipping lane where the main tow ship, the Signet Warhorse III, was positioned to begin towing.

Saratoga was underway to Texas at 9:31 a.m. The trip is expected to take approximately 16 days with an anticipated arrival Sept. 6.