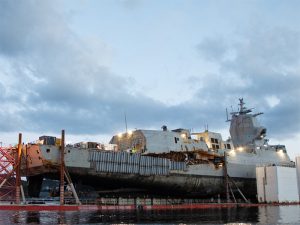 Norwegian Defense Minister Frank Bakke-Jensen says that the Government has decided it is more appropriate to dispose of the frigate KNM Helge Ingstad, rather than to repair it. The frigate sank following 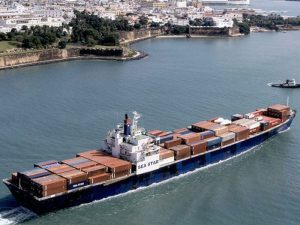 Coast Guard spokesman CAPT Mark Fedor said during a press conference in Miami this morning that one body was found in a survival suit in a 225-square mile debris field near the Bahamas. The body was “unidentifiable” and was not recovered. CAPT Fedor said the Coast Guard also recovered one of the ship’s two lifeboats with no one on board. He said that the Coast Guard was still hopeful of finding survivors among the 33 crew on board. Despite the difficult conditions of being subjected to 140 mph winds and 50-foot waves, “I’m not going to discount someone’s will to survive,” says Fedor.

JULY 11, 2013 — The remaining section of the containership MOL Comfort has sunk. Owner Mitsui O.S.K. Lines, Ltd.(MOL) reports the fore part of the vessel sank in the high seas near