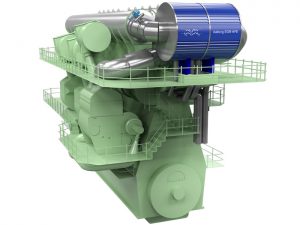 “EGR provides Tier III NOx compliance with a very compact footprint, but compliance itself is only part of the full potential,” says John Pedersen, Business Manager, Boilers, Combustion & Heaters at Alfa Laval. “Working closely with MAN Diesel & Turbo to optimize the EGR technology, we saw additional opportunities through our expertise in marine boilers. The result is the Alfa Laval Aalborg EGR-HPE economizer, which paves the way for extraordinary energy and fuel savings.”

“By moving the break point for waste heat recovery from a medium engine load down to a low load, the Aalborg EGR-HPE enables even slower steaming,” says Mr. Pedersen. “That means fuel savings that quickly pay back the economizer, offset the EGR investment and lower CO2 emissions on top of the NOx reduction.”

“The difference in steam quality has a direct effect on the performance of the steam turbine,” says Mr. Pedersen. “Installation factors play a role, but a substantial increase in power generation can be expected.”

“The EGR economizer makes waste heat recovery beneficial at far lower engine loads, down to around 30%” says Mr. Pedersen. “This means that vessels can steam even slower, with huge fuel savings as a result. A vessel performing EGR and using the Aalborg EGR-HPE will be not only compliant with Tier III, but also substantially more fuel efficient.”

“As a front-runner in the pursuit of green technologies, we were keen to see what the Aalborg EGR-HPE could do,” says Ole Christensen, Senior Machinery Specialist at A.P. Moller-Maersk. “But while we were enthusiastic about the boiler’s potential, we were also somewhat uncertain as how it would handle the physical realities of EGR. The temperatures are twice as high as those of traditional waste heat recovery, and the gas pressures are far greater.”

Those concerns disappeared when the boiler was brought online with the Maersk Cardiff’s two-stroke MAN B&W 6S80ME-C9 engine in November 2014. “Not only did the boiler survive,” says Mr. Christensen, “the results we have seen during testing are very promising.”

“By introducing the EGR boiler into the NOx equation, we’ve truly changed the balance,” says Alfa Laval’s Pedersen. “Suddenly EGR is not only a means of Tier III compliance, but also a means of radically improving the vessel’s energy efficiency. And that makes it a very different sort of investment.”