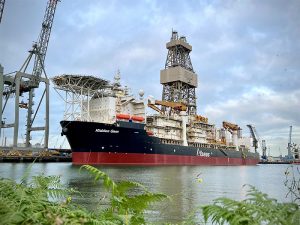 With all major auto makers ramping up plans to switch production to electric vehicles, battery demand looks set soar — and with it demand for the base metals needed to produce them. 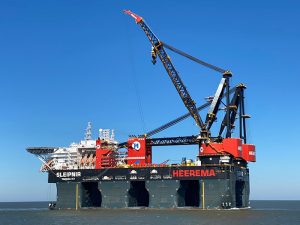 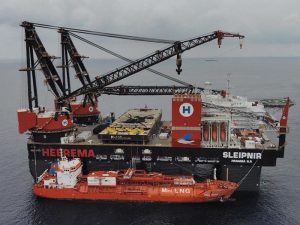 The world’s largest and most powerful semi-submersible crane vessel — Heerema Marine Contractors’ Sleipnir — is about to begin its 45 day maiden voyage to Spain, after being supplied with 3,000 metric 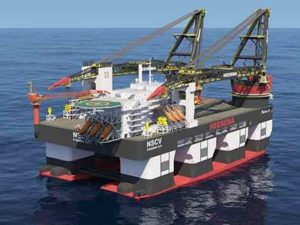 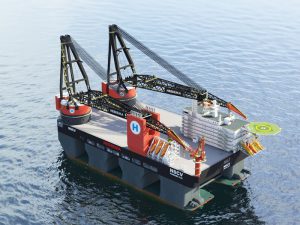 MAN Diesel & Turbo says that the total power output of the engines is some 96 MW, meaning that this will be one of the largest engine installations ever seen aboard a commercial ship.

The vessel will be the first in its size range to feature dual-fuel technology and, on completion, will be the world’s largest vessel of its kind.

Engine delivery is scheduled for first quarter 2017 with vessel delivery due from the shipbuilder in 2018.

The highly efficient MAN Diesel & Turbo package ensures full fuel-flexibility and will meets NOx Tier III emission limits at all times – whether the vessel is within Tier III zones or not – both during operation on LNG and during operation on MGO with the help of the SCR system.

MAN Diesel & Turbo says that the engines maintain their high efficiency – including during SCR operation – through integrated and customised control strategies.

“The entire project has special requirements in all aspects – it is absolutely a customized solution and a notable feather in our cap to have been selected as propulsion-system supplier for this unique vessel,” says Lex Nijsen – Head of Four-Stroke Marine – MAN Diesel & Turbo. “This is not just the largest, dual-fuel propulsion system ever featured on a single vessel, it also ensures Tier-III compliance in all operational scenarios, whether in gas- or MGO-modes, and whether within or without NOx Tier III-controlled areas. The solution MAN Diesel & Turbo is delivering to Sembcorp Marine and Heerema is reliable, efficient, flexible and meets the highest safety and environmental standards.”

A key determinant in the choosing of the 51/60DF engine was its ability to fulfill the particularly high load-ramp requirements demanded by the NSCV’s two giant Huisman 10,000 ton cranes in both diesel and gas modes while maintaining its efficiency.

Another key characteristic of the four-stroke unit is its ability to operate at 100% MCR and above, in gas mode, and to switch smoothly and seamlessly from gas to liquid-fuel operation (and vice versa) at full load without any fluctuation in output or speed. These are all essential features to satisfy the SSCV’s vital DP-3 (dynamic positioning) station-keeping requirement.

Furthermore, with the aim of becoming the most environmentally friendly crane vessel ever built, operation will be on ultra-low sulfur fuel, a fuel type that the 51/60DF readily handles.

The MAN SCR solution is a modular system, with the built-in flexibility to adjust to the NSCV’s particular requirements such as its long exhaust-gas lines, the distance between the SCR and engine. Nor does the SCR system negatively affect load-ramp requirements. In this respect, MAN’s SCR is very much a customized solution.

With a length of 220 m and a width of 102 m, the NSCV will be the world’s largest crane vessel. Despite the vessel’s large dimensions, optimally locating the engines and SCR systems aboard proved a challenge, one which MAN Diesel & Turbo and the flexibility of the SCR system helped resolve.

The vessel features four engine rooms, each with three MAN 8L51/60DF engines. The integration of SCR and engine-control system enables the SCR to be operated at a relatively low exhaust-gas temperature, which is the basis for a high engine efficiency, and enables the SCR to be positioned further away from engines. In consequence, no compromises have to be made with the vessel layout and the SCR systems will be positioned under the ship’s funnel in a vertical arrangement, some 80 m away from the engines. 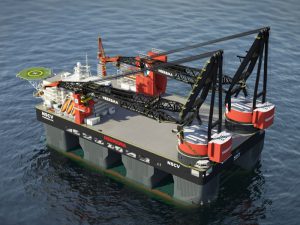 The vessel is being built on behalf of Netherlands based Heerema Offshore Services and when completed will be the largest of its type, and the third largest vessel overall, in the world. The contract with Wärtsilä was placed in October.

“We have a long standing relationship with Wärtsilä propulsion solutions on other vessels in our fleet and look forward to successfully continuing this relationship. We have every confidence that these state-of-the-art thrusters are the right choice for this vessel, which is destined for offshore projects worldwide,” says Sipke Schuurmans, Heerema Offshore Services.

Accurate positioning of the vessel will be ensured by eight 5,500kW Wärtsilä Underwater Mountable thrusters, four of which are also retractable.Wärtsilä has developed these four forward retractable thrusters specifically for this project, and given them the type indication WST-65RU. They feature a unique combination of retractable and underwater mountable functionality.

The thrusters installed at the aft of the vessel are WST-65U underwater mountable thrusters.

The outboard parts of both types are completely interchangeable.

The underwater demounting capability of all eight thrusters means that neither drydocking, nor the use of a habitat is necessary in order to exchange the thrusters.

The thrusters are equipped with Wärtsilä Oceanguard anti-pollution face type seals, which have been selected primarily because of the challenging environments in which these thrusters will operate.

In addition to the thrusters, the full scope of supply includes auxiliaries for steering and lubrication, the control units, and Wärtsilä’s Propulsion Condition Monitoring Service (PCMS).

Delivery of the Wärtsilä equipment will commence at the end of next year.

“Once again, Wärtsilä’s unmatched offering to the marine sector is emphasised with this multi product contract to one of the largest vessels ever to be built. For a large vessel of this type involved in offshore construction work, efficient dynamic positioning is a major requirement. The eight degree tilted propeller shaft solution that is a feature of the Wärtsilä Underwater Mountable thrusters, significantly reduces the interaction between the thrusters and the hull, thereby notably enhancing the vessel’s dynamic positioning performance. This feature, together with the retractability of the thrusters, was extremely important in the award of this valuable contract,” says Arto Lehtinen, Vice President, Propulsion, Wärtsilä Marine Solutions.

The new vessel will be equipped with two cranes of 10,000 tonnes lifting capacity, which is beyond any heavy crane lifting that the marine contracting market currently offers.

The NSCV will be self-propelled with a transit speed of 10 knots. 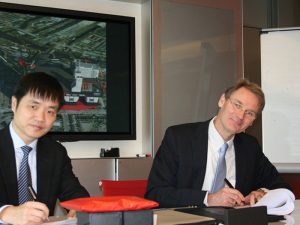 JULY 15, 2015 —  Singapore’s Sembcorp Marine (SCM) has entered into an Engineering and Construction contract worth approximately US$1 billion with Heerema Offshore Services B.V. (HOS) to build a new DP3 semi-submersible