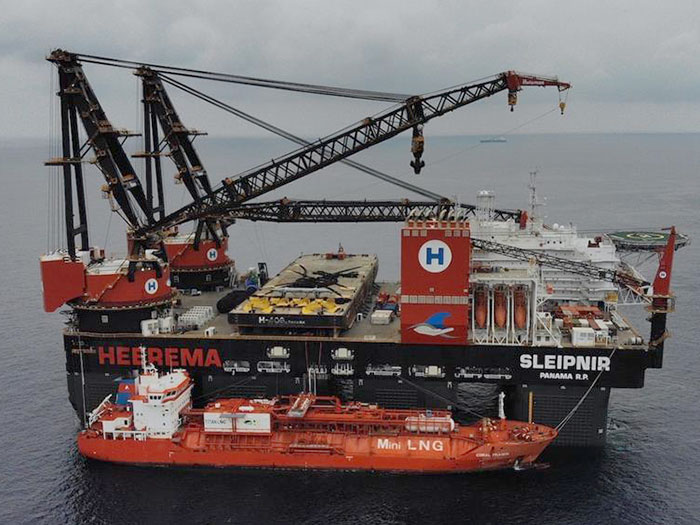 The world’s largest and most powerful semi-submersible crane vessel — Heerema Marine Contractors’ Sleipnir — is about to begin its 45 day maiden voyage to Spain, after being supplied with 3,000 metric tonnes of chilled LNG. According to Titan LNG, which supplied the fuel, this is the largest quantity of LNG that has ever been bunkered.

Recently completed by Sembcorp Marine’s Tuas Boulevard, Singapore, shipyard, Sleipnir is designed for worldwide offshore heavy lifting. It is equipped with two cranes of 10,000 metric tonnes lifting capacity each and a reinforced deck area of 220 meters in length and 102 meters in width.

The two day bunkering of LNG took place 12 miles off the coast of Indonesia. Leiden, Netherlands, based Heerema is the first shipowner to perform an LNG bunkering in this area of the world, selecting another Dutch company, Titan LNG, to carry out the operation. Titan LNG chartered the Coral Fraseri commercially managed by a third Dutch company, Anthony Veder, as the bunkering vessel.

Coral Fraseri, the newest addition of the Anthony Veder small scale LNG pool of vessels, loaded in Singapore at the SLNG terminal where Titan LNG sourced the fuel from Pavilion Gas, the Singaporean gas and LNG supplier. The Coral Fraseri followed the Sleipnir offshore and performed a ship-to-ship operation to cool down its tanks.

Sleipnir will now set sail for Spain, rounding South Africa’s Cape of Good Hope. In the Mediterranean, Titan LNG will again supply the Sleipnir using the Coral Fraseri, which which make its passage to the Mediterranean via the Suez Canal.