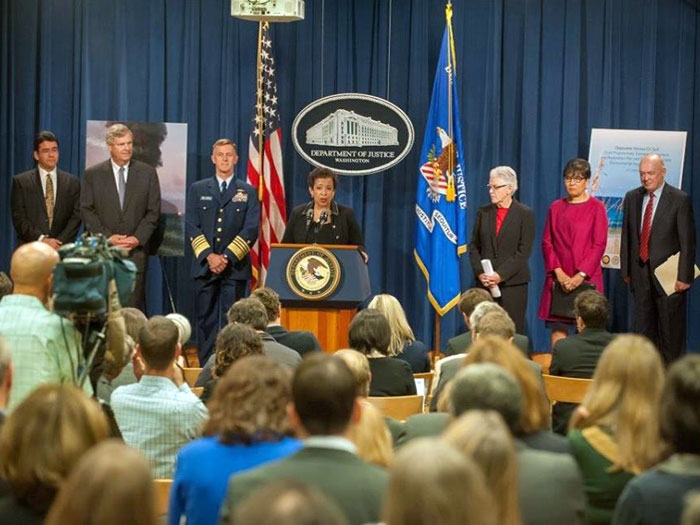 OCTOBER 6, 2015—In what is the largest settlement with a single entity in U.S. history, U.S. Attorney General Loretta E. Lynch announced that the Department of Justice had secured a settlement of more than $20 billion against BP to resolve civil claims resulting from the Deepwater Horizon oil spill in 2010. Lynch says the resolution, the result of a lawsuit filed by the DOJ in December 2010, includes civil claims under the Clean Water Act, for which BP has agreed to pay a $5.5 billion penalty—the largest civil penalty in the history of environmental law.  It includes natural resources damages claims under the Oil Pollution Act, for which BP has agreed to pay $7.1 billion—on top of the $1 billion it previously committed to pay for early restoration work.  And it includes economic damages claims, for which BP has agreed to pay $4.9 billion to the five Gulf states and up to $1 billion to local governments.

“Five and a half years ago, the world watched as the Deepwater Horizon oil rig exploded, burned and sank into the Gulf of Mexico,” says Lynch. “Deep below the surface, BP’s Macondo well had blown out and was gushing oil into the Gulf.  The oil began spreading hundreds of miles from the well, coating the sea floor, forming vast slicks across the surface and staining more than 1,300 miles of coastline.  With that explosion, lives were lost.  The Gulf was flooded with oil.  And the Gulf coast way of life – a uniquely American way of life – was hanging by a thread.  Over the course of nearly three months, the Gulf region was inundated with more than 3 million barrels of oil.  And by the time the torrent stopped, it had inflicted unprecedented harm on the economy, the environment and the population of the Gulf region.  Ecosystems were disrupted, businesses were shuttered and countless men and women lost their livelihoods and their sense of security.”

Once the agreement is approved by the court, one of the largest environmental restoration efforts will get underway in the Gulf.  Under the RESTORE Act, 80 percent of the $5.5 billion Clean Water Act penalty will go to help the Gulf recover from the injuries it has suffered.   In addition, BP’s payments for natural resources damages will help fund Gulf restoration projects that will revitalize damaged habitats, such as coastal wetlands and support the revival of wildlife populations, including marine mammals, sea turtles, oysters and birds.  This work will be guided by a comprehensive restoration plan that we are also announcing today and which was developed by a Trustee Council made up of four federal agencies and trustees from all five Gulf states—Florida, Alabama, Louisiana, Mississippi, and Texas.