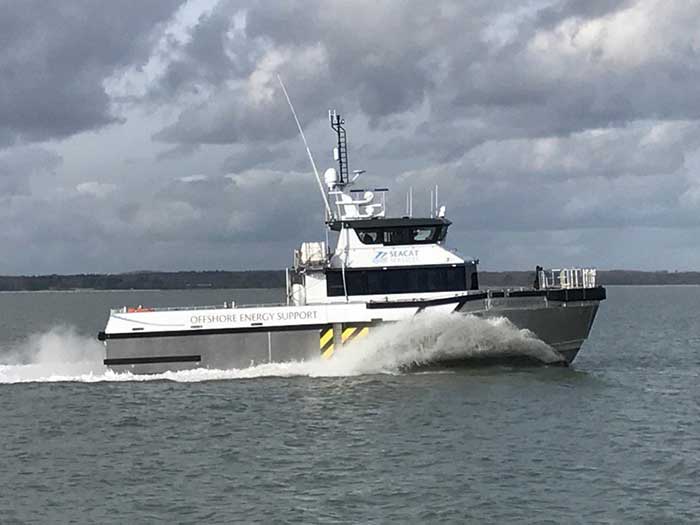 Seacat Enterprise has transited to and completed its first operational assignments at the Triton Knoll Offshore Wind Farm using Hydrogenated Vegetable Oil (HVO) as a fuel.

With offshore wind being widely seen as a pathway to decarbonization, it’s inevitable that reducing the carbon footprint of operations at the wind farms themselves will come in for increasing attention.

Following a scheduled refit at the Alicat yard in Great Yarmouth, which saw Seacat Enterprise undergo a number of modifications, she was loaded with 8,000 liters of HVO30 for her return trip to Grimsby and first days of operation. Her journey and first assignments were completed successfully, with all engines performing to expectation.

HVO is developed utilizing waste oils derived from agricultural products, and as such has a markedly lower life cycle greenhouse gas (GHG) emissions profile than traditional marine gasoil (MGO) derived from fossil feedstocks. The reduced emissions profile of HVO, combined with its ability to blend almost seamlessly with MGO, thereby reduces total operational emissions in accordance with the volume of the blend.

By fueling Seacat Enterprise with HVO30—with 30% of the total fuel volume being HVO – Seacat says it has reduced CO2 emissions from the vessel’s transit and first operating days by 28%.

Offshore wind has become a focal point for a number of national decarbonization programs, As the sector grows exponentially and comes under higher scrutiny for its ability to meet ambitious emissions reduction targets, operators are increasingly looking to their supply chains and service partners as a means of cutting further emissions from their operations.

The success and longevity of the sector now increasingly hinges on the ability of offshore wind suppliers—in particular vessel operators—to effectively balance reductions in emissions with the high standards of performance required to optimize output from offshore operations.

Commenting on the development, Ian Baylis, Managing Director, Seacat Services, said: “Seacat is committed to reducing our emissions profile as an organization, and to setting the industry standard for environmental responsibility in the maritime supply chain. Updating Seacat Enterprise to the latest in high efficiency, high performance vessel design and running her effectively with HVO demonstrates to the industry what environmental improvements can be achieved now, with current technologies, while future solutions take shape.

“Up to 96% of emissions from the offshore wind support sector are generated while our vessels are under charter, during which time the fuel choice is specified by the customer. As offshore project owners and investors look to reduce emissions from their supply chains, we are proactive in supporting our charterers as they address this added pressure—and projects like this one prove what can be achieved with our vessels today.”

The design modifications made to Seacat Enterprise during her refit were specified by Seacat’s long-time vessel design partner, Chartwell Marine, and overseen by marine sustainability consultancy, Cedar Marine.

“Seacat’s commitment to maintaining a modernized fleet with the most current technologies available means Seacat Enterprise’s engines are well-suited to operating a broad range of distillate fuels with only minor modifications,” said Owen Preece, Managing Director and Marine Surveyor at Cedar Marine. “In fact, HVO proves to be a closer specification to Seacat’s engines than traditional marine diesel.”

“In keeping pace with leading vessel technologies,” he continued. “Seacat has thereby unlocked a means to generate considerable emissions savings across its entire fleet through the use of significantly cleaner alternative fuels. The emphasis is now on wind farm owners and charterers to support this shift on a more widespread and permanent basis – which in turn will improve the business case for use of these fuels.”