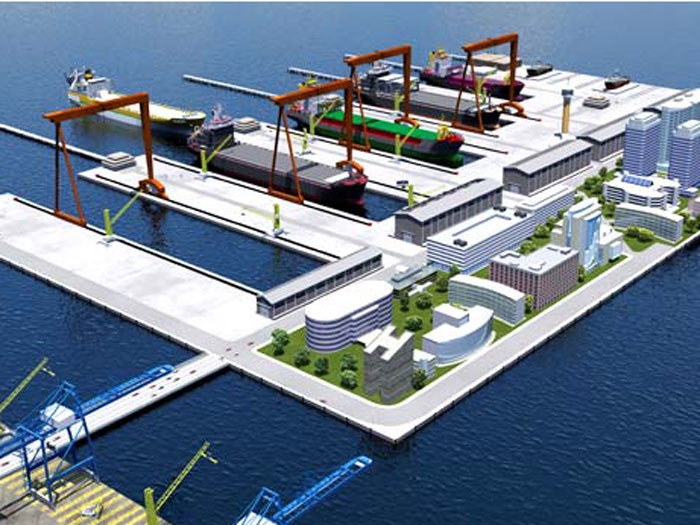 MARCH 26, 2015 — An ambitious plan that would see the Caribbean get two of the largest graving dock facilities in the world has taken a step forward.

The Trinidad shipyard is one of two planned by the company, the other being in Guyana. Each will have five graving docks catering to vessels from 20,000 dwt to 250,000 dwt and up to 380 m long.

TDDCL has executed a Memorandum of Agreement with Invest Trinidad and Tobago (InvesTT), which is empowered by the Government of the Republic of Trinidad and Tobago to facilitate the future development and operation of the Port of Spain Dry Docks on the reclaimed 140-acre Sullivan Island. The project is located offshore in the Gulf of Paria, in the vicinity of Sealots, just north of the Caroni River outfall. It includes a 250-hectare dredged turning basin and a causeway connecting Sullivan Island to mainland Trinidad’s highway network.

TDDCL has now procured the final terms of reference from the Environmental Management Authority of Trinidad and Tobago for the conduct of an Environmental Impact Assessment.

As part of its engineering designs and as may be needed for the Environmental Impact Assessment, TDDCL will also conduct detailed geotechnical investigations with soils analysis and report over an area of seabed of some 300 hectares.

The company has issued a request for expressions of interest from qualified and experienced firms to submit proposals no later than 2:00 p.m., Friday, April 3, 2015, via email to [email protected] In submitting expressions of interest, consultants are requested to indicate the following reference codes: TDDCL/2161/1.2/15 for the Environmental Impact Assessment and TDDCL/2161/1.3/15 for the Geotechnical Investigation and Report.

The full Request for Proposals (RFPs) will be sent to respondents after receipt of expressions of interest.

TDDCL says its projects will cater to the growing international demands of the expanding global shipping fleet, with specific emphasis on meeting what it says is a critical need in the Western Hemisphere.

The firm’s project in Trinidad, the Sullivan Island, Port of Spain Dry Dock Facility will constitute world-class graving dock and bunkering facilities situated on the proposed Sullivan Island, along the Gulf of Paria.

The two projects will have a combined total drydocking area of 199,300 square meters.In addition to the core drydocking facilities,

TDDCL plans to maximize the potential of the projects by embarking on the development of a number of on-site, downstream projects including a marine and industrial park, and residential and commercial centers at both locations