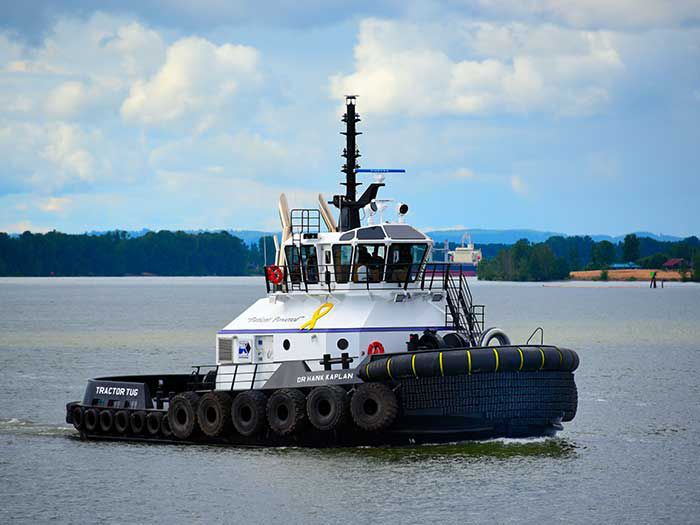 Built by the Diversified Marine shipyard in Portland, OR, the tug has a length of 80′, a beam of 36′ and a depth of 13’7″ and is the first vessel in North America to feature a complete Cat Marine propulsion system with both Cat power and Cat azimuth drives. It is equipped with two 3516C marine propulsion engines that deliver a combined 5,350 HP. The vessel also features the new Cat MTA 524-T azimuth thrusters, which were specially designed for high performance tractor tugboats.

Some other new features include maximized bollard pull, simpler installation and maintenance requirements, and an increase in maneuverability. The tug is also a sister class vessel to the recently built Michelle Sloan and Lela Franco.

Throughout a career spanning 45 years, Kaplan devoted his time and effort to cancer research and treatment, earning him a place as a locally celebrated and highly regarded clinician. Kaplan garnered his reputation due not only to his unique methods of treatment, which have become a standard among his peers, but due to his philosophy towards his patients.

His professional statement reads simply, “Try to help the patient make the most of life.” It is this philosophy and work ethic that allowed him to build, as the Seattle Times wrote, “One of the most successful private oncology practices in the Northwest.” He was the cover subject of a Seattle Magazine entitled “Top Doctors.”

In addition to honoring his name with the new vessel, Harley Marine hosts an annual fundraising event which benefits Kaplan’s organization the “Kaplan Cancer Research Fund.”

The event has raised more than $2 million for the Swedish Medical Center over the past five years. This year the event will take place August 14 at Glendale Country Club.

More information about the tournament HERE