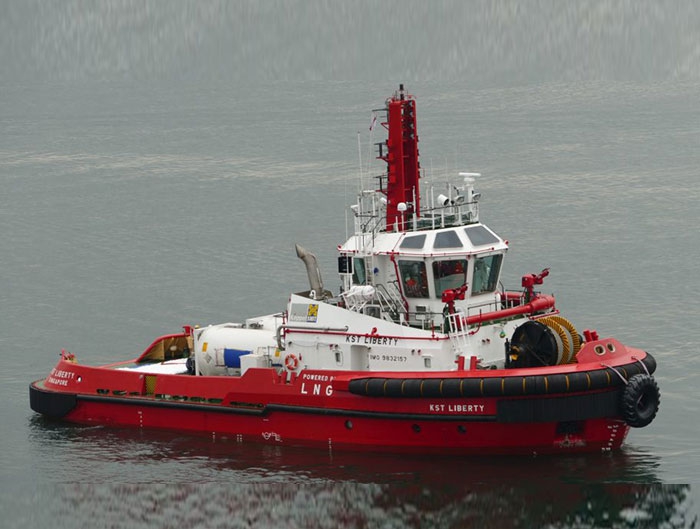 The vessel was named  at a ceremony held at the Keppel Singmarine shipyard today, with Mr. Loh Ngai Seng, Permanent Secretary at Singapore’s Ministry of Transport as the Guest of Honour.

Mr. Loh Ngai Seng said at the ceremony, “Today’s christening of KST Liberty marks an important milestone in Singapore’s journey to make LNG bunkering available at our port as early as 2020. I congratulate Keppel O&M and Keppel Smit Towage for taking the lead, under MPA’s LNG Bunkering Pilot Program, to build and operate Singapore’s first LNG-fueled vessel. Such partnerships bring us closer to our goal of cleaner and more sustainable marine fuels.”

Mr Abu Bakar, Managing Director (Gas & Specialised vessels) of Keppel O&M, said, “We are pleased to support Keppel Smit Towage and the industry’s push towards adopting LNG as a marine fuel with this upcoming delivery of South East Asia and Singapore’s first LNG-powered tug. Our award-winning dual-fuel tug design offers more economical operations with efficient fuel consumption; a simplified bunkering process; optimized deck space that increases the safety and comfort of the crew; and ease of operations. One of seven dual-fuel vessels we are building, Keppel O&M has developed various solutions that are able to meet different needs along the LNG value chain.”

Smart designs were incorporated to enhance the tug’s safety and comfort. The LNG fuel is carried in containerized, type-C ISO-certified tanks on the main deck, and refuelling can be carried out by truck to ship operations or by replacing the empty tanks with replenished ones. The vessel is equipped with an innovative and patented LNG vaporiser which is compact and cost-effective.