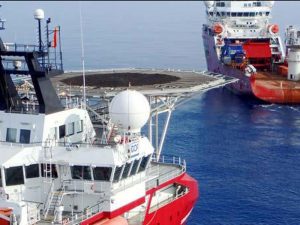 In the North America region, DOF Subsea has secured a major IMR contract with Husky Energy in support of its operations offshore Eastern Canada. The DOF Subsea team based in St. John’s will supply IMR services over aperiod of 10 years firm with 10 years options.

The work scope includes a Light Intervention Vessel and two work class ROV systems and personnel. The offshore operations will commence in 4th quarter 2015 by mobilizing two work class ROVs on a third party vessel on charter to Husky, followed by delivery of a DOF IRM vessel in 2017.

DOF Subsea says the contract is of strategic importance, substantially strengthening its presence in the Canadian offshore market and establishing a solid relationship with Husky Energy.

Another North America region award is a term contract in the Gulf of Mexico for a firm period of 10 months with option to extend.Operations will commence in October 2015.

One of the group’s subsea vessels will be utilized under the contract, which is an extension of a current contract held by DOF Subsea North America for a key client in the region.

DOF ASA CEO Mons S. Aase commented: “I am very pleased with the Group’s ability to secure term work in a challenging market, and especially winning the Husky contract and strengthening the North America subsea region. This award is a team effort, utilizing the expertise within all disciplines in the DOF Group.”