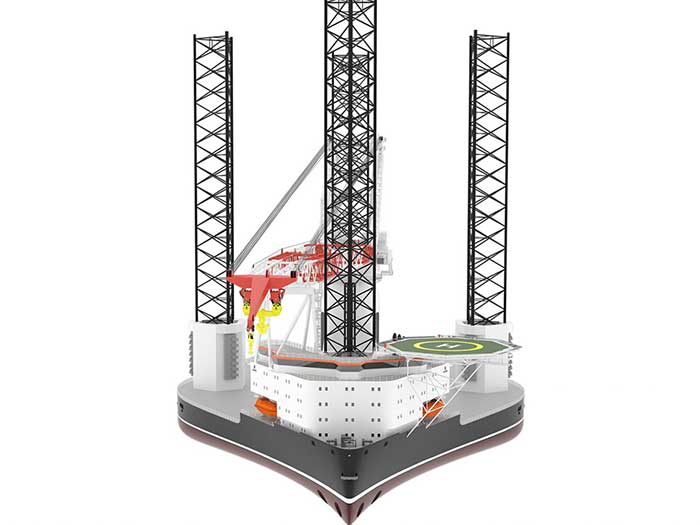 The jack-up’s cruciform structural lay-out makes it more than 10% lighter than conventional designs. In combination with a high capacity crane, SOUL enables operators to take the next step in developing offshore wind farms.

“The development of this novel jack-up vessel is the logical next step in our strategy to widen our portfolio and become a leading company in supporting the offshore wind industry with more efficient assets”, says Tore Ulstein, deputy CEO at Ulstein Group. “Combining the vast track record in heavy lift vessel designs from our Dutch Ulstein branch with SeaOwls’ experience in jack-up technology, resulted in an innovative jack-up vessel concept based on proven technologies.”

“We noticed this created uncertainty with turbine manufacturers, wind farm operators and installation contractors on how to install the future generation wind turbines, as floating vessels are not a viable alternative, so we went back to the optimal jack-up design, a square platform with the legs spaced out as much as possible,” says comments SeaOwls founder and managing director Erik Snijders. “Rotating the platform by 45 degrees provided a natural bow shape with two legs and the crane on the vessel’s centerline.”

“This seemingly simple twist in the design allowed to make a huge improvement in operational aspects as well,” says Bram Lambregts, deputy managing director, Ulstein Design & Solutions BV. “With the main crane around the stern leg, optimal main deck reach and over-the-side lifting capabilities is created. And as the hull now houses much larger leg footings, bearing pressures on the seabed are reduced, while the wake of the spud cans does not interfere with the inflow to the propulsion thrusters.”

The SOUL series will come in various sizes, allowing the transport of from three to six 10-12 MW wind turbines. All loading and installation operations can be performed without the need of ballast water.