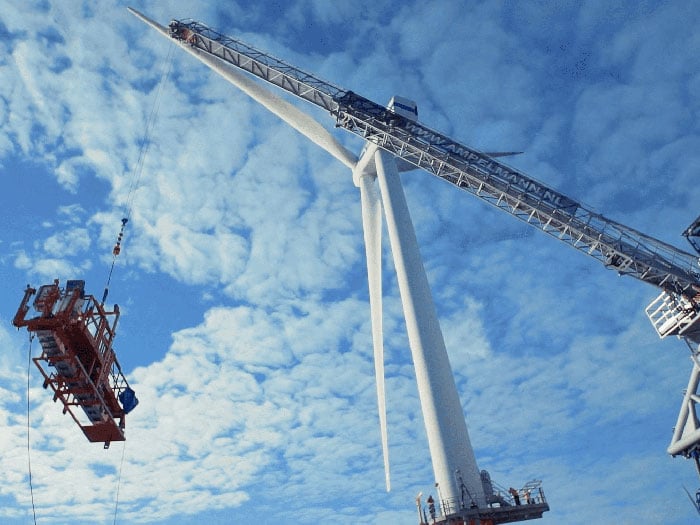 Ampelmann says the walk to work system will be fitted to the Paul Candies in third quarter 2023, to support the hook-up and commissioning of turbines and that the vessel will be used during the construction of the South Fork, Revolution and Sunrise offshore wind farms.

As the system compensates for all six degrees of freedom in relation to the vessel and turbine, it will enable safe, consistent, and reliable offshore access in sea states up to 4.5 meters Hs during its year-long operation, says Ampelmann.

Along with providing safe access for personnel, the system will also be used to hoist cargo, equipment, and tools and the gangway’s fuel transfer capabilities will allow for the testing of the generators and turbines.

By converting the Paul Candies into a W2W vessel, says Ampelmann, the E1000 will enable the servicing of multiple turbines at once, greatly increasing the speed and efficiency of operations.

“We would like to express our deepest gratitude to Otto Candies for choosing us to facilitate this important operation,” says Steven Kaub, Ampelmann’s business developer for American offshore wind. “Over the years we have developed a solid relationship with Otto Candies, and their enduring trust in our systems and services allows us to showcase what we can offer to the U.S. offshore renewables market.”

Ampelmann has more than a decade of experience in the American offshore access market and a nearly 15-year global track record in the offshore wind sector. Over the last 10 years, motion compensated systems have become a well-known feature of the American oil and gas sector, but this will the first time that the E1000 will be used in the U.S. offshore wind market.