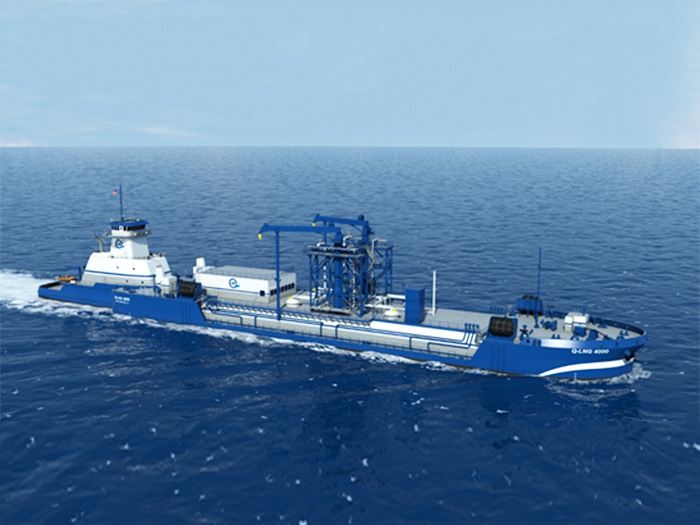 LNG bunkering ATB will be built by VT Halter Marine

NOVEMBER 7, 2017 – Shell Trading (US) Company has finalized a long-term charter agreement with newly formed Q-LNG Transport, LLC for a U.S.-flag 4,000 m3 LNG bunker barge. The first of its kind to be based in the United States, the ocean-going LNG bunker barge will supply LNG to marine customers along the southern East Coast of the U.S. and support growing cruise line demand for LNG marine fuel.

Q-LNG is a new company owned 70% by Harvey Gulf International Marine CEO Shane Guidry and 30% by Harvey Gulf. It will own and operate assets providing marine transportation of LNG as a fuel source to various ports in Florida and the Caribbean, starting with its long term contract with Shell.

Q-LNG signed a contract with shipbuilder VT Halter Marine, Inc., Pascagoula, MS, to build the Articulated Tug Barge (ATB) unit, which will be constructed to meet the requirements of the International Gas Carrier (IGC) code.

Q-LNG says that the project will rely heavily on collaboration between VT Halter Marine and Wärtsilä, which will be delivering a large scope of equipment to the project. Wärtsilä’s deliverables for the barge include all of the cargo handling, cargo control, and cargo containment system as well as the PMS and automation onboard. The supply for the tug includes all of the bridge navigation, communications, and dynamic positioning equipment as well as thruster, PMS and automation.

Guidry says, “We are pleased to continue our long relationship with Wärtsilä by partnering once again on another first for the North American LNG supply chain.”

“At a time when companies are stacking boats and scrapping newbuilds, our CEO and partner Shane Guidry is contracting and building,” says Harvey Gulf Board member W. Steve Orlando.

“This investment in LNG as a marine fuel for the U.S. will provide the shipping industry with a fuel that helps meet tougher emissions regulations from 2020,” says Maarten Wetselaar, Integrated Gas and New Energies Director at Shell. “Our commitment in the Americas builds on Shell’s existing LNG bunkering activities in Singapore and Europe, as well as recently announced plans in the Middle East and gives us the ability to deliver LNG as a marine fuel to customers around the world.”

THEN THERE WERE TWO
Upon delivery, the LNG bunker barge would be the second such vessel built in the U.S. The first, the Clean Jacksonville, was built by Conrad Shipyards, headquartered in Morgan City, LA. It will operate out of JAX LNG in Jacksonville, FL, refueling TOTE Maritime’s Marlin Class LNG-fueled containerships.

JAX LNG is a joint venture between Pivotal LNG and Northstar Midstream.