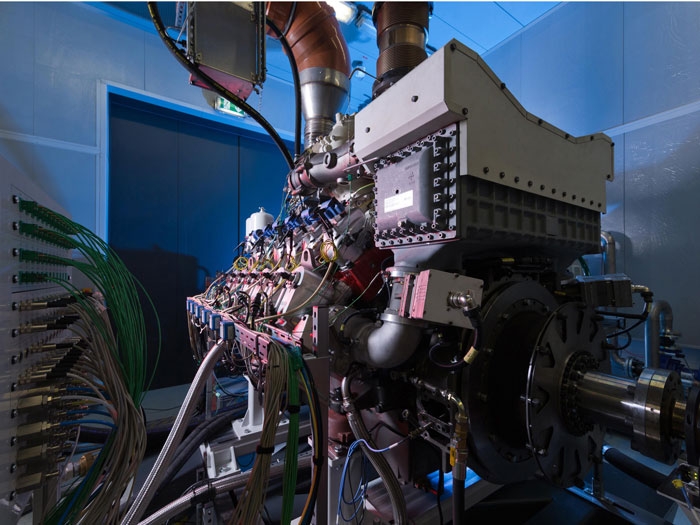 At SMM, MTU will present an animated demonstration of the latest fast-running Series 4000 gas engine. The first field-trial engine is scheduled to go into service in 2016 in a new environmentally-compatible tugboat

AUGUST 5, 2014 — MTU will be using next month’s SMM event in Hamburg, Germany, to showcase its solutions for meeting the IMO Tier III emission standard that comes into force in 2016 .

Customers benefit from an integrated concept for IMO Tier III comprising an MTU drive and SCR system which need little space and offers an excellent power-to-weight ratio. Tailor-made services with individualized maintenance intervals round off the offering.

MTU will use an animated presentation to demonstrate its Series 4000 gas engine based on its 4000 M63 diesel engine. which is widely used in working vessels. The first field-trial Series 4000 gas engine is scheduled to go into service in 2016 in a new environmentally-compatible tugboat and the engine is due to be launched on the market in 2018. Delivering some 2,000 kW, the 16-cylinder version of the engine meets IMO Tier III emission standards without requiring exhaust aftertreatment.

As a one-stop system supplier MTU will be showcasing variable-speed gensets for yacht and merchant fleet applications. These consume significantly less fuel under partial load than gensets running at constant speeds. Independently of any electrical frequency, users can call on a maximum power of 3440 kWmec at 2,100 rpm. Other benefits include low noise emission, extended runtime between major overhauls and low maintenance costs offering considerable savings in operational expenditure particularly in commercial applications. Power density has also been appreciably improved.

A new unit for civil and naval applications will be presented, based on the Series 1600 6-cylinder in-line engine which is certified as IMO Tier II and EPA Tier 3 compliant, that offers long maintenance intervals and a specific fuel consumption of less than 205 g/kWh at full continuous power. The versatile engine also meets classification rules for commercial applications and other requirements for demanding civil and military applications including noise, shock and magnetic signatures.

MTU will be providing information about its current range of IMO Tier II certified engines – Series 2000, 4000 and 8000, and also the 396 and 1163 with up to,10.000 kW – used in tugboats and offshore vessels, yachts, frigates and coastguard ships. On-board power generators delivering between 5 and 3,000 kW complete MTU’s product line-up.

As a turnkey partner MTU will also be exhibiting automation systems such as the Blue Vision New Generation for propulsion plants equipped with MTU Series 2000 or 4000 engines in yachts and work boats. Clients can choose between the straightforward non-classifiable Blue Vision Basic and an extended, classifiable version, Blue Vision Advanced.

At SMM, MTU will present an animated demonstration of the latest fast-running Series 4000 gas engine. The first field-trial engine is scheduled to go into service in 2016 in a new environmentally-compatible tugboat