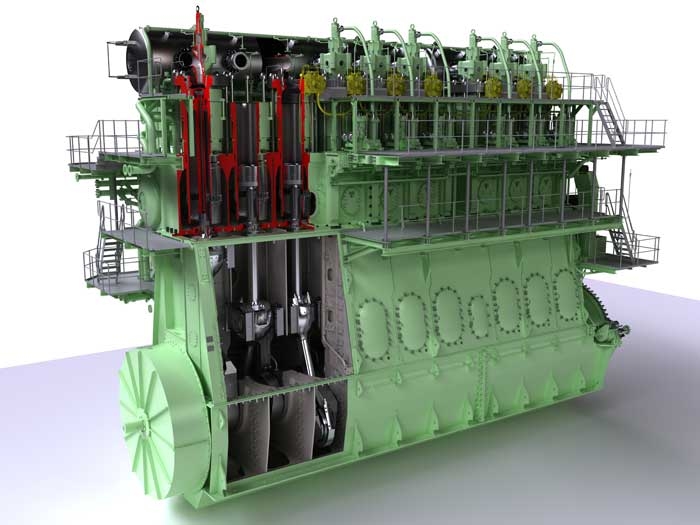 JULY 22, 2014 — Three 36,000 cu.m LEGCs (Liquefied Ethylene Gas Carriers) ordered by Oslo headquartered Ocean Yield ASA, will each be powered by a single MAN B&W ME-GI low-speed, dual-fuel engine. The engines will run on ethane, marking the first time ethane has been used as fuel to propel an oceangoing vessel.

The ships will be built by Chinese shipbuilder Sinopacific Offshore & Engineering and are scheduled for August, October and December 2016 deliveries.

Hartmann Schiffahrt, part of German ship-owning and management group Hartmann AG, has acted as technical leader on the LEGC project, while Gaschem Service, another Hartmann division, is commercially responsible for the employment of the vessel.

MAN Diesel & Turbo reports that ethane was chosen as fuel, in preference to HFO, due to its more competitive pricing as well as the significantly shorter bunkering time it entails.

As a fuel, its emissions profile is also superior to HFO – in which respect it is similar to methane – and compared to HFO it contains negligible sulfur, 15-20% lower CO2 and emits significantly fewer particles under combustion.

MAN Diesel & Turbo says that the ME-GI engines will be set up so that they can easily be converted to run on methane as an alternative.

The ME-GI is a Diesel engine in contrast to the other dual- or triple-fuel engines on the market, which are Otto engines. Simply put, says MAN Diesel & Turbo, engines that operate according to the Diesel principle have a higher efficiency and power concentration than those following the Otto principle.

MAN Diesel & Turbo says that its ME-GI technology uses the Diesel cycle to maintain high efficiency and robust combustion with no need for any derating and that the engine – by virtue of its Diesel operating principle – will have negligible methane/fuel slip, one of many low-emission characteristics, and dispenses with the need for restrictive load ramps or other knock-preventing measures.

The ME-GI engine gives shipowners and operators the option of utilizing fuel oil or gas depending on relative price and availability, as well as environmental considerations.

The engine uses high-pressure gas injection that allows it to maintain the numerous positive attributes of MAN B&W low-speed engines that have made them the market leader in the maritime community.

An ME-LGI counterpart that uses LPG, methanol and other liquid gasses is also available, and has already been ordered.