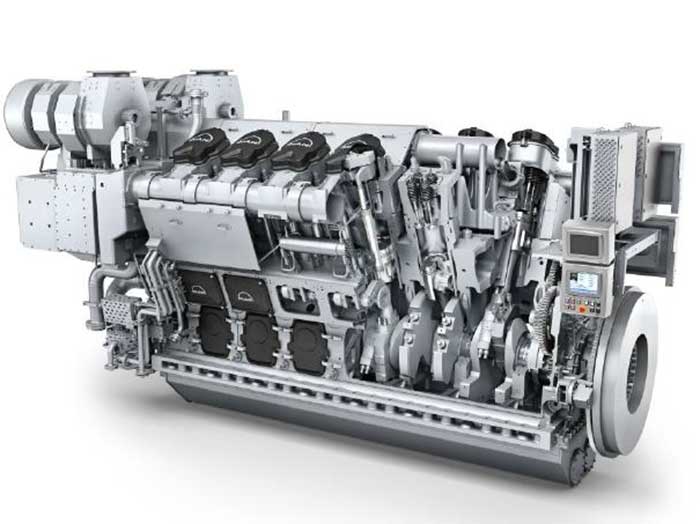 The MAN 32/44CR engine, ordered as a 12V version for Huanghua Port Bureau

Each vessel will feature one 6L32/44CR and one 9L32/44CR engine with the latest, flexible, common-rail technology. CHECD cited the engines’ proven robustness, high efficiency and high output as important decision criteria during the selection process.

One of the engines will be dedicated to driving a CPP, as well as a mechanical dredge pump, and is designed to satisfy its demands for constant torque and reliable performance under different operational conditions.

The engines will be delivered as “SCR (Selective Catalytic Reduction)-ready,” so as to readily accommodate any retrofit should Tier III operation be requested in the future.

The propulsion packages also include an MAN Alpha Twin screw CP propeller plant – type VBS720-ODF – with AHT nozzles, as well as two MAN Renk RSLV-720 gearboxes. Shipment of both shipsets is scheduled for the turn of 2017/18.

The new CHECD dredges’ basic design comes from Royal IHC in the Netherlands. IHC has an extensive know-how and many years of experience in the design and building of standardized and custom-built dredges for many different applications.

Egbert Sprokkereef – Sales Manager, Marine – MAN Diesel & Turbo, the Netherlands, said: “We are proud that CHECD went with our product portfolio again. IHC and MAN Diesel & Turbo can look back on a longstandingpartnership in various, successful projects in the past and we are delighted to continue our close cooperation with both companies.”

The new vessels will be built at the Shanghai Zhenhua Heavy Industry Co., Ltd. (ZPMC) shipyard.

In another boost to MAN Diesel & Turbo locally, Jiangsu Haixin Shipping Heavy Ind. has again ordered two MAN 32/40 engines as part of a propulsion package in connection with a repeat order for an 8,000 cu.m TSHD, a further sister to an existing series of MAN-powered vessels.

The scope of delivery covers one shipset including a propulsion package consisting of two 9L32/40 engines, an MAN Alpha twin-screw VBS860 CP propeller, single marine reduction RSVL-800 gearboxes from Renk, plus an SCR system that enables the engines to fulfill Tier III. Delivery is scheduled for end-2017.

Lex Nijsen – Vice President and Head of Four-Stroke Marine – MAN Diesel & Turbo, said: “This new vessel adds to the already sizable number of dredging references we have in the Chinese market. Within the past number of years, MAN engines have won more and more of this important, domestic market – increasingly as part of entire MAN propulsion packages – and this repeat business is a ringing endorsement of the quality of our products.”

Jiangsu Haixin will construct the vessels at its shipyard in China, and MAN Diesel & Turbo will build the engines at its Augsburg plant in Germany.

Both engines will drive a CPP and have a power take-off for a mechanical dredge-pump drive.

The Port of Huanghua is an artificial, deep-water, international seaport on the coast of Huanghua, Cangzhou Prefecture, Hebei. MAN Diesel & Turbo is working with a partner, Yue On Shipping, on this project to provide the propulsion package, as well as additional expertise.

Weijian Yang – Senior Sales Manager, Marine – MAN Diesel & Turbo, Augsburg, said: “This order represents the first new dredger for MAN Diesel & Turbo in northern China with the new TSHD being built at CSSC Huangpu Wenchong Shipbuilding Co., Ltd., which is a well-known dredger specialist worldwide with longstanding experience and excellent expertise. Through this project, we start a cooperation with the shipyard that we hope to deepen in the future”.