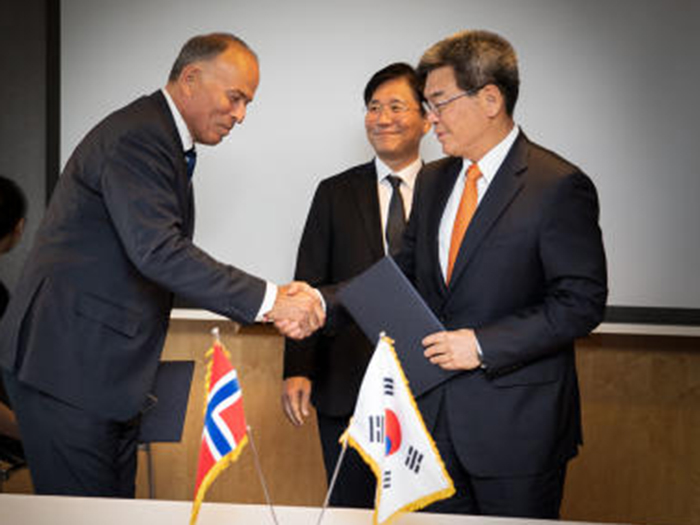 Sandefjord, Norway, based coatings manufacturer Jotun has signed a memorandum of understanding (MOU) with the world’s largest shipbuilder, South Korea’s Hyundai Heavy Industries. It covers the use of a new type of primer said to reduce solvent emissions by up to 90 percent.

Jotun says the MOU is the starting point of a closer cooperation on the use of the innovative solvent-free primer.

“The partnership with Jotun will allow HHI, the world’s largest shipbuilder, to be better equipped to meet the new environmental requirements that are aimed at reducing solvent emissions, “ said Ka Sam-Hyun.

“We are, of course, very pleased with the agreement with the world’s largest shipyard, but even more satisfied that our innovation is contributing to a better environment,” said Morten Fon, CEO Jotun.

Jotun focuses heavily on research and development of environmentally friendly paints, and the corrosion-protective primer reduces total solvent release by 80-90%.  It says it has worked on developing the new type of marine paint for 13 years. It will reduce solvent (VOC) emissions into the air from approximately 250 grams per liter to just nine grams per liter.

Jotun says that shipyards will save hundreds of millions of dollars by avoiding investments in plants related to the combustion of VOC’s. VOC combustion also leads to CO2 emissions, so this innovation provides a double benefit.

“We have conducted research in Korea and in Norway while developing this paint, and after 13 years can conclude that we have succeeded in developing a product that reduces solvent emissions by over 90 percent,” says Erik Risberg, one of the scientists behind the new paint.
“In addition, the product has better corrosion protection than previous systems, which helps extend the life of the vessels and reduces the need for maintenance. This is also very attractive for shipowners,” Risberg adds.

Primers make up 60-70 percent of the total amount of paint applied to a ship.

The new product is currently available for Korean shipyards and selected shipbuilders in Europe who have experience in applying single-coat primers that require careful application techniques.