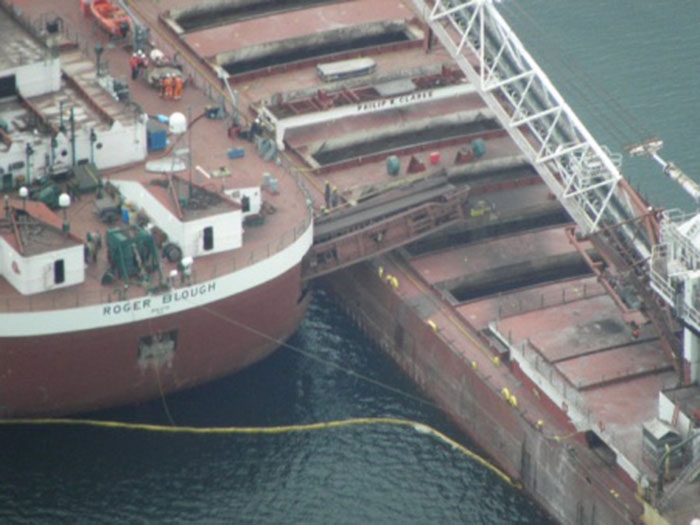 Taconite drops into the motor vessel Philip R. Clarke off the conveyor belt of the grounded self-unloader Roger Blough

JUNE 3, 2016 — The U.S. Coast Guard says that it continues to monitor and respond as lightering operations, which began this morning, continue on the grounded Great Lakes self-unloading bulker Roger Blough.

Yesterday, another Great Lakes Fleet self-unloading bulker, the Philip R. Clarke arrived on scene with the Blough and lightering operations started at 5:45 a.m. this morning.

The Coast Guard says that the safety perimeter has been increased from 500 yards to 750 yards.

Plans continue to progress to safely free the Blough from Gros Cap Reef through the combined efforts of Canadian partners, company representatives and the U.S. Coast Guard.

Boom remains in place at the rear of the vessel as a preventative measure against pollution and Canadian Coast Guard Environmental Response personnel are in Sault Ste. Marie, Ontario, with a large inventory of pollution control equipment with procedures in place and equipment readily available for all possible ship-source spill scenarios.

The U.S. Army Corps of Engineers will be providing assistance for lightering operations and will ensure the Birch Point Range channel is safe for navigation after the Blough is removed from the grounding site.

There have been no changes in the rate of flooding and the crew remains in good condition.

A Transport Canada overflight was conducted Thursday afternoon and reported no pollution.