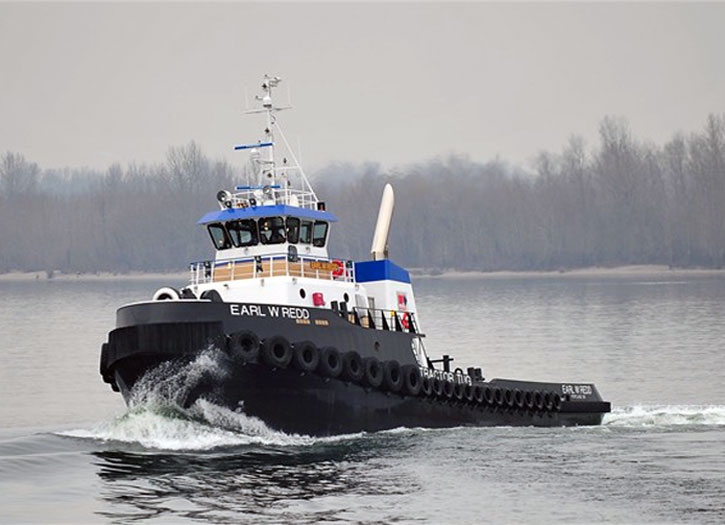 The tractor tug unique because it is the first in Harley Marine’s fleet—and one of the first in the U.S.—to be equipped with Caterpillar’s Tier 4 emissions technology. The Earl W Redd will not only meet but also exceed the toughest marine EPA standards, says Harley Marine, in keeping with the company’s strong commitment to “green” business practices.

“They have a reputation for being very sustainable and forward-looking,” says Brent Nelson, a Caterpillar Marine territory sales manager who works closely with Harley Marine. “They want to run a clean, green fleet, and they’re setting a precedent by being the first to power a vessel with these engines.”

The Earl W Redd measures 120 feet by 35 feet, with a loaded draft of 19 feet 3 inches. The tug features two Cat 3516 Tier 4 Final main engines that will each produce 2,675 horsepower at 1,600 rev/min. Each of the engines is paired with a selective catalytic reduction (SCR) after treatment system. SCR uses a urea-based solution to reduce NOx contained in diesel exhaust down to nitrogen and water vapor.

“Harley Marine should save over $1 million across a 15-year lifecycle on total fluid consumption (diesel plus DEF) costs for this new build compared to an equivalent Tier 2 powered vessel. They are able to deliver an increased level of performance due to the higher power rating with increased efficiency,” says Ryan Darnell of Caterpillar’s Large Power Systems division. “That’s a direct result of engine fuel efficiency improvements that our SCR technology allows us to make by reducing NOx downstream of the engine combustion process.”

The main engines will be paired with Rolls Royce US 255-P30-FP azimuth thrusters delivering an expected bollard pull capability of 75 tons.

The Earl W Redd has a fuel capacity of 127,000 gallons and can carry 6,534 gallons of water, 1,137 gallons of lube oil, 1,263 gallons of hydraulic oil and 8,200 gallons of diesel exhaust urea. The vessel also features tow and bow winches by Markey and fendering by Schuyler. The bow winch is specially designed for ship handling and escort services.  Auxiliary power comes from John Deere 125kW generators.

The namesake for the tug is Earl W. Redd, the father of Diversified Marine’s owner, Kurt Redd. Harley Marine Services describes Mr. Redd as “loved by everyone he encountered and a charmer.” He was a 32nd Mason and an athlete, playing baseball, football, basketball, skiing, and golfing. He even cleared the pool table, given the opportunity, but the water and fishing were his true passion.

Employed by Hyster and US Steel, Mr. Redd later worked at Harder Mechanical Contractors where he retired at 70. After retirement, Earl became part of the Diversified team and a strong presence for the remaining 25 years of his life.