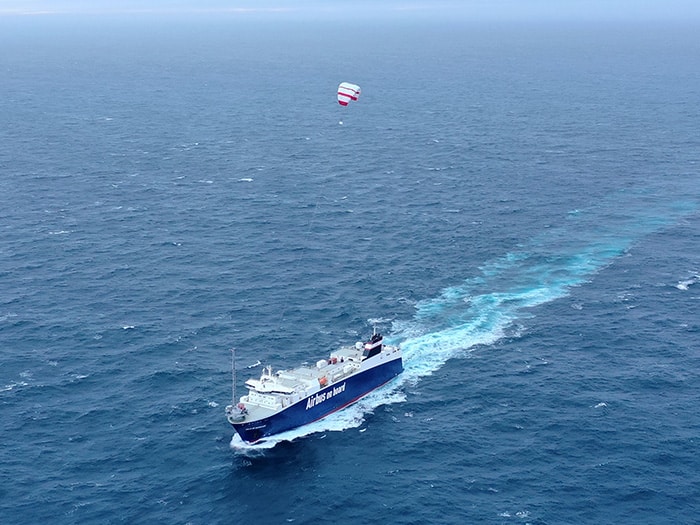 A 250 square meter Seawing flying at a height of 200 meters from Louis Dreyfus Armateurs’ vessel Ville de Bordeaux. A 500 square meter version is also onboard the vessel [Photo: Airseas]

The system has been installed on the 154 meter RO/RO vessel Ville de Bordeaux, which is operated by Louis Dreyfus Armateurs (LDA) and chartered by Airbus, Airseas’ minority shareholder and launch customer.

A team of Airseas engineers is on board to test the system and gather data, with the operational support of LDA’s crew and Airbus’ Transport & Logistics department.

The first stages of the sea trials have successfully validated key steps such as the folding and unfolding of the wing, take-off and landing, and flights in altitude. The next phase will test the Seawing in a broader range of weather conditions and fine-tune the automation system.

The footage shows the Seawing system in action, flying 200 meters above sea level, harnessing the power of the wind to propel the vessel and reduce the main engine load. Seawing aims to reduce fuel consumption and emissions by an average of 20%. Combining expertise from the aerospace and maritime sectors, Seawing will use digital twins and advanced automation systems to ensure that the system can be safely deployed, operated and stored at the push of a button with minimal input or training needed from crew.

The company says the solution can be installed on virtually any type of commercial vessel. In addition to the first system on the Ville de Bordeaux for Airbus, Airseas has also received firm orders from Japan’s K Line for five Seawing systems, with additional options to equip up to 51 vessels in total.

“Testing a brand new technology in real-life conditions and while respecting the operational constraints of a commercial ship is an ambitious endeavor, and the solid progress of our sea trials is a testimony to the dedication of our team of engineers on board and on shore,” said Vincent Bernatets, CEO of Airseas. “With these strong initial results, we’re more determined than ever to keep testing the system and collecting data, and accelerate our mission to scale up and rapidly deploy wind propulsion technology on vessels around the world. Immediate action is needed to tackle climate change and shipping’s impact on GHG emissions; we are proud to have a solution that can help ships reduce their emissions right now, and accelerate the decarbonization of the maritime sector over the coming years.”

“We are committed to playing an active role in reducing shipping’s carbon emissions, starting now,” said Antoine Person, corporate secretary of Louis Dreyfus Armateurs. “We are proud to be associated with this project as a supplier and partner of Airbus, working for the success of this innovative wind propulsion solution alongside Airseas.”