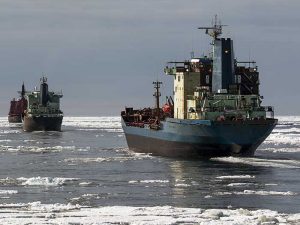 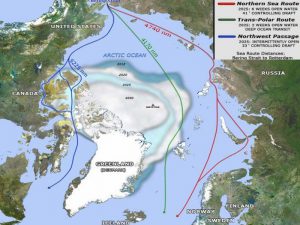 Transpolar shipping routes could open by 2040, or earlier

FEBRUARY 17, 2016 — Commercial summer shipping across the North Pole may be possible by the end of the century, with the first potential crossings feasible for ice-strengthened ships around 2040, according 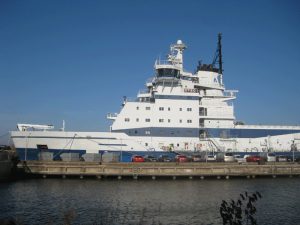 The prospect of increased shipping in the Arctic due to the melting of polar ice has inspired an international research effort focused on maximizing safety in arctic waters. Fifteen doctoral students at five universities in Finland, Norway, Germany, and Canada are filling science gaps on a breadth of issues ranging from ice impacts on hulls and preventing accidents to determining the movement of oil after a spill and its impacts on the arctic ecosystem.

The work is being carried out through the Joint Research Centre of Excellence for Arctic Shipping and Operations based in Aalto University (Finland), supported by GBP 1,707,673 in funding from Lloyd’s Register Foundation. This five-year project began in September 2013.

“Compared to vessels operating in open waters,” Dr. Brian Veitch points out, “much less is known about environments in cold ice-covered seas.” Dr. Veitch, professor of ocean and naval architectural engineering (ONAE) at Memorial University of Newfoundland in St. John’s, is one of the principal investigators of the project. “They’re so far away, and they haven’t been studied as much so there is a bit of a deficit from a science point of view”—a deficit that makes conventional risk management techniques more uncertain.

“Our ambition is to generate knowledge that specifically can be used in the formulation of legislation, regulations, and industry standards—information that will give the people who are making decisions evidence upon which to make better decisions.” This article profiles the work of three PhD students who are focusing on preventing accidents, the movement and distribution of oil after a spill, and oil impacts on the marine ecosystem.

Preventing Accidents
Doug Smith, an ONAE PhD candidate at Memorial University, completed his Masters degree in Hydrodynamics and is now focusing on preventing shipping accidents from occurring in Arctic waters. Since arctic shipping accident information is scarce, rather than depending on historical data, he is developing models that reflect both the interdependencies of work functions on a vessel—how work actually gets done—and the variability within that work.

“This project focuses on what works, and uses that context to explain why things do not work from time to time,” says Smith. “If we can understand what makes shipping operations work, we can focus on making things work well more often, and being safe more often.”

He cites an example of variability. When a captain is navigating in ice-infested waters, he must assess the variability in the ice conditions, which could be constantly changing. He must then communicate his expected power requirements to the engine room, where there is also variability. If the engine state is in some variation that prevents it from providing the required power (such as maintenance on one engine or one engine cannot start), this will affect the Captain’s ability to navigate.

The accident prevention component of this project is focused on ways of improving shipping safety, without requiring the prediction of adverse outcomes. Smith is using the functional resonance analysis method (FRAM) of modeling, which incorporates an understanding of variability within the system.

“When you understand the range variability, you can adopt solutions to keep it within your control,” he says. “But if variability is not understood and controlled, that increases susceptibility to accidents.” Smith’s models will be populated with data that reflects both variabilities and also adjustments that have been made that successfully accommodate them.

He will be inputting information from captains, chief engineers, and others on board ships who can shed light on variability and the adjustments that were made that kept operations safe. Smith will be building models for arctic shipping activities, primarily for navigating in ice-covered waters, as well as for  maneuvering ships in tight quarters such as leaving and entering port.

Complexities of Oil-Ice Interactions
The models that Mawuli Afenyo is developing will predict the fate and transport of oil spills in icy waters. “Right now, we are not ready for an oil spill in the Arctic,” he says. “Ice represents more complexity,” says the PhD candidate with a Master’s in Petroleum Engineering and an MBA in Green Energy and Sustainable Businesses.

“The oil can spread on ice, you can have it on snow, in leads and encapsulated in ice, or it can go below the ice,” he says, adding that there are a lot of uncertainties regarding oil-ice interactions, and noting that the limited field experiments that have been done make it difficult to know how oil will behave in this environment. “The Arctic has become very important,” Afenyo observes, “so we have to take these things seriously.”

One issue is remoteness and the capability of governments and other agencies to respond to a spill in a timely manner. Afenyo is following the lead of Norwegians who have done some numerical modeling of oil in ice conditions. He notes the complexity of the task, pointing out that a number of interrelated processes take place simultaneously immediately following a spill: evaporation, dispersion, spreading, sinking, biodegradation, and emulsification.

Afenyo adds that there has been little study of encapsulation—an oil spill becoming engulfed in ice. Location-specific data will be fed into two integrated models built on a risk analysis framework.

His aim is to apply this framework to arctic shipping, which will, in turn, provide guidance with regard to policies, operations, ship design, and environmental response measures. Dr. Faisal Khan, Department Head in Process Engineering and Vale Research Chair of Process Safety and Risk Engineering, and Dr. Brian Veitch, a professor in the Ocean and Naval Architectural Engineering department and Husky Research Chair in Oil and Gas—both at Memorial University—are supervising Afenyo’s project.

Oil Impacts on Animals
Maisa Nevalainen, a PhD candidate in Environmental Sciences at the University of Helsinki, Finland, is focusing on the ecosystem impacts of an oil spill in the Russian Arctic. “Even if there is no drilling,” she says, “ships are still going to use those routes. Climate change is making it easier and easier.”

Noting that there is no data  available, Nevalainen quickly adds, “I hope we never have the data.” She will be interviewing subject matter experts, asking them about probabilities regarding the impact of oil on arctic species, combining their accumulated knowledge, and adding historical and toxicological data into the model.

The Bayesian model she will be building will reflect probabilities.

The species she is focusing on are at all levels of the functional food web, from apex predators (e.g,, polar bears) down to benthic invertebrates. Addressing one facet of the impact of a spill, Nevalainen says, “If the polar cod would die, that is such an important species in the Russian Arctic food web. If it happens at a time when the offspring are not yet juvenile and they cannot avoid the oil, then all the eggs could die.”

In her view, the ability to responsibly manage Arctic shipping operations depends on knowledge of risk. “We should understand better how big the risk is. Right now, environmental groups are saying the risk is enormous, and oil companies are saying they are being safe, so no worries. I’m hoping to find some actual number in between those two.”

While Nevalainen’s model will be focused on the Northern Sea Route and coastal areas of the Russian Arctic, it will be functional for other areas once local species distribution data has been inputted. She is collaborating with Afenyo; hence, her recent visit to St. John’s. Afenyo’s model will show where the oil goes after a spill, and her model will show how the ecosystem responds to that particular quantity and distribution of oil.

Smith, Afenyo, and Nevalainen plan to publish the results of their work in scientific papers, and information regarding their findings will be available on the Research Centre of Excellence for Arctic Shipping and Operations web site: http://cearctic.aalto.fi/en/