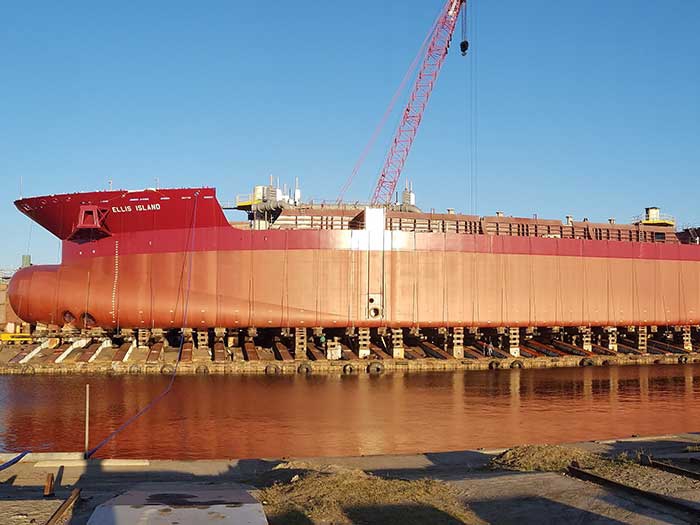 Launch of the barge marks a significant milestone in the project after two years of construction and hundreds of thousands of man hours worked.

Great Lakes Dredge & Dock CEO Jonathan Berger commented, “This ATB hopper dredge is a state-of-the-art ‘Jones Act’ vessel designed and constructed to meet the nation’s growing maritime infrastructure needs. This vessel will help to contribute to the U.S. economy and the future economic prosperity of the nation.”

President of Great Lakes Dredge & Dock, David Simonelli, commented, “We look forward to the completion of the Ellis Island, the largest and most efficient hopper dredge in the U.S. fleet. We are eager to put the ATB to work and to demonstrate its unique capabilities building coastal protection, restoring barrier islands in the Gulf and deepening the nations’ ports.”

The Ellis Island is 433 feet long and 92 feet wide with a hopper volume of 15,000 cubic yards. The vessel’s two 36-inch diameter drag arms are capable of mining sand from the ocean floor 122 feet below the water’s surface.

The tug portion of the vessel, the Douglas Mackie, is expected to launch later this year. The shipyard has informed the company that it anticipates sea trials on the ATB vessel next March, and Great Lakes Dredge& Dock expects dredging operations to commence in the second quarter. With the combination of the optimized tug and barge hull design and increased haul capacity the ATB Hopper Dredge is expected to provide ship-like productivity and efficiency at the lower operating cost of an ATB.