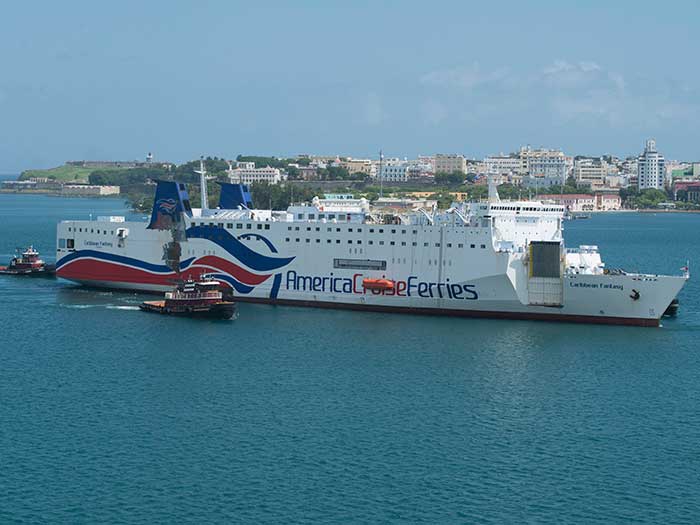 Salvage and fire fighting teams boarded the vessel Friday to assess the status of the fire, assess damage to the vessel and determine the stability of the vessel. They located the remains of two missing pets near the disembarkation area. They had been left on board when 511 people were evacuated from the ship following a fire Wednesday, Aug. 17, 2016.

When the salvage and firefighting teams boarded the vessel, the fire was still active but was contained inside the engine room and said to be in the decay stage. Teams accessed the majority of the vessel but were not able to clear the engine room, the generator room or the steering gear.

The vessel was refloated around 10 p.m. Friday and a tow line was established around 2 a.m. Saturday by tug boats.

Ardent, the responding salvage company, finalized a vessel salvage and towing plan that was approved by the Coast Guard and the vessel was subsequently towed into San Juan Harbor.

The Unified Command is developing an assessment and disposal plan for potential hazardous and non-hazardous waste.

The Coast Guard has established a 100-yard safety zone around the vessel. There have been no reports of sheening or pollution near the vessel at this time.

The vessel is being closely monitored and 2,500 feet of boom has been deployed around the vessel as a precautionary measure against potential discharge from the vessel.

The Unified Command has implemented an air monitoring plan in the vicinity of the vessel and Pier 15 to ensure the safety of responders and the local community.

A joint marine casualty investigation with the Coast Guard, the National Transportation Safety Board, RINA Services and the flag state, Panama, is underway.

The 1989-built Panamanian-flagged vessel has a less than sparkling inspection record. According to the Equasis data base, which categorizes the ship as a Passenger/Ro-Ro Cargo Ship, 10.53% of the vessels inspections in the past 36 months have led to detentions.

A U.S. Coast Guard inspection in San Juan earlier this month found four deficiencies related to fire safety measures and one related to the propulsion and auxiliary machinery. None was severe enough to warrant detention of the vessel.

The most recent detention recorded in the Equasis data base was in Gibraltar in July this year and was for six days and related to deficiencies related to the auxiliary engines.