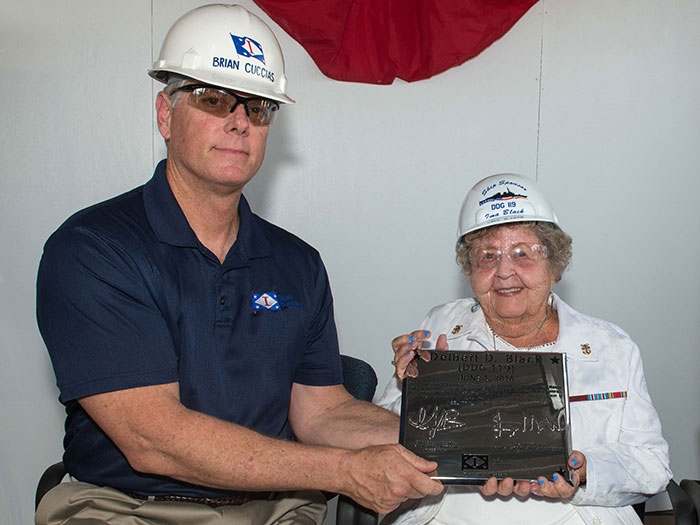 The ship will be the 32nd Arleigh Burke-class (DDG 51) guided missile destroyer Ingalls has built for the U.S. Navy and is named in honor of the first Master Chief Petty Officer of the Navy.

Delbert D. Black served as a gunner’s mate in the Navy and was aboard the battleship USS Maryland during the attack on Pearl Harbor. His wife, Ima, is the ship’s sponsor.

“To the shipbuilders, thank you so much for your love and your care in building my ship,” she said. “My message to you is the same as always: ‘Hurry up! I’m running out of time.’

“There is a saying that we have in the Navy,” she continued. “That saying is: ‘Carry on.’ Carry on, according to the Navy Blue Jackets manual, means to resume your duties. Sometimes it happens in the stillness of the night. I can hear the faint whisper of a voice in my ear saying, ‘Carry on. Carry on.'”

Delbert and Ima Black met after World War II, during which she served as a Navy WAVE (Women Accepted for Voluntary Emergency Service). They were married 50 years until the time of his death in 2000.

She and 45-year shipbuilder Earnest Wiley penned their initials onto a keel plate, and they were welded for permanent display on the ship by CC Tanner, a structural welder at Ingalls.

“This ship’s name carries a special meaning,” said Ingalls Shipbuilding President Brian Cuccias at this morning’s keel-laying ceremony. “Destroyers are traditionally named after great men and women in the history of our Navy, and the namesake of DDG 119 is no exception. DDG 119 will be strong and capable. She can be no other way, because our men and women in the Navy and Delbert Black’s legacy deserve nothing less.”

“Today Mrs. Black and Mr. Wiley create a sign that will stay with this ship throughout its service,” said Capt. Mark Vandroff, program manager of the Navy’s DDG 51 program. “It will inspire us today and eventually inspire the future sailors of Delbert D. Black.”

The current Master Chief Petty Officer of the Navy, Mike Stevens, also spoke at the ceremony.

“We are here today for the laying of the keel, which is a tradition going back centuries and marks a milestone in the life of any ship,” he said. “The entire foundation of the ship is built around the keel, just as the foundation for today’s enlisted force was built in part around the leadership of Del Black. I once read that ‘Legacy is the lantern that lights the path for others to follow.’ It gives me great pride to know that MCPON Black’s legacy will continue for generations to come.”

To date, Ingalls has delivered 28 Arleigh Burke-class destroyers to the Navy. There are five more currently under construction at Ingalls, including Delbert D. Black.