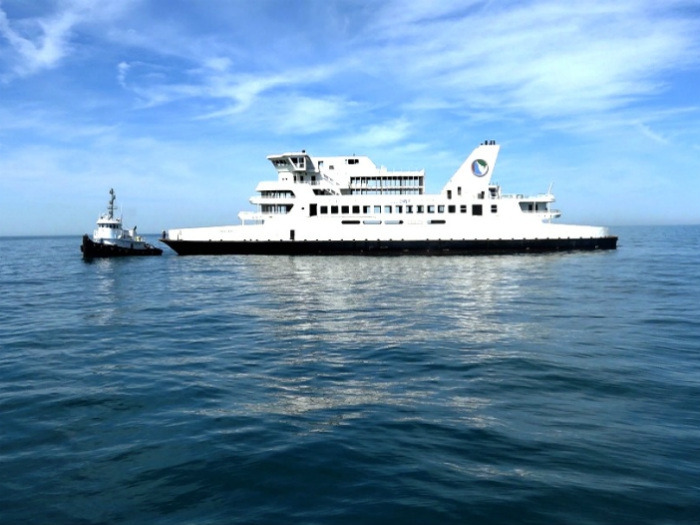 The ferry Twin Capes being towed to sea

JUNE 20, 2018 —After making thousands of trips shuttling passengers and their vehicles between Cape Henlopen, DE, and Cape May, NJ, the 43-year-old car ferry M/V Twin Capes made her final voyage on June 15…to the bottom of the Atlantic.

The old ferry was sunk and has found new life as part of Delaware’s Del-Jersey-Land Inshore Artificial Reef. The artificial reef, which is 26 miles off the Delaware and New Jersey coast, provides recreational opportunities for fishermen and divers.

The Twin Capes was purchased from the Delaware River and Bay Authority (DRBA) last year by the Delaware’s Department of Natural Resources and Environmental Control (DNREC) for $200,000 in preparation for making it part of the reef.

Built in 1974 by Todd Shipyards in Houston, the 320 ft Twin Capes made her last commercial trip for the DRBA in the summer of 2013. In the 1990s, DRBA had refit the Twin Capes with a new superstructure and four new decks, multiple lounges, a new pilothouse, and “shark-fin” smokestacks.

The DRBA attempted to sell the 895-passenger, 100-car ferry, but found that “the market was thin for such a specialized vessel,” said DRBA Director of Ferry Operations Heath Gehrke in a press statement last year.

DNREC’s Norfolk, VA-based marine contractor Coleen Marine sunk the vessel. Other vessels that are part of the reef include the ex-destroyer USS Arthur W. Radford and the Zuni/Tamaroa, the one-time harbor tug and Battle of Iwo Jima survivor turned U.S. Coast Guard cutter.

The DRBA sold the Twin Capes last year because current ridership levels at the Cape May-Lewes Ferry are more than adequately served by its other three vessels, M/V Delaware, M/V New Jersey, and M/V Cape Henlopen. Additionally, the Twin Capes also was significantly more expensive to operate as compared with the other ferries in the DRBA fleet, requiring 17 crew members to operate and using 126 gallons of fuel per hour (nearly 50 percent more crew and about 25 percent in additional fuel than other DRBA ferries).

DRBA also had to incur about $1.1 million in annual costs to keep the vessel in mothballed since 2013.

DRBA was able to salvage about $230,000 worth of equipment, electronics, and engine components from the vessel.