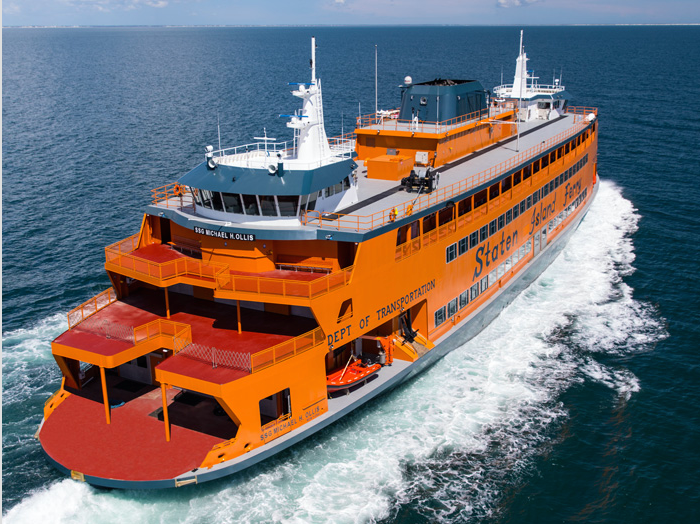 Externally, the new vessels are classic Voith Schneider-propelled double enders with the iconic appearance that has made the Staten Island ferries a floating New York City land mark. However, the new ferries are larger, reflect modern technology, and will operate more safely in extreme weather conditions. They feature popular design elements of past Staten Island Ferries and new customer-service amenities such as more comfortable seating and phone-charging outlets and an oval upper-deck promenade that will for the first time serve as an outdoor “walking track” for ferry riders.

They have the latest in marine technology for energy efficiency and environmental friendliness. There are design features on the vessels that are part of the emergency response plan with the city. Lessons from 9/11 were built into this fleet and they can be connected to the New York fire vessels, also built by Eastern Shipbuilding Group, to support evacuations and rescue.

Externally, there’s little to distinguish the 72 feet, 7 inches long by 24 feet, 6 inches wide, 78-passenger Sea Change from any other Incat Crowther-designed Catamaran of similar size. Beneath the skin, it’s a different story.

The vessel has been conducting operational trials and will enter service in the San Francisco Bay area once all necessary Coast Guard approvals are completed.

Delivered by the Meyer Turku shipyard in Finland in December 2020, the ship has four Caterpillar MaK 16 M 46 DF main engines, which were delivered to the shipyard as floating engineroom unit built by sister Meyer yard Neptun Werft in Rostock, Germany.

Mardi Gras has a 3,600-cubic-meter LNG capacity, sufficient for 14 days of cruising with passengers. LNG not only powers the ship’s four MaK main engines, it’s used for all shipboard systems, from elevators, lighting and computers to galley equipment and, of course, Bolt, the first roller coaster at sea—a feature as likely to attract Carnival customers, as its eco-friendliness.

The ship has a striking new external color scheme that Carnival Cruise Line is now rolling out fleet wide and features six distinct themed zones with a variety of food, beverage and entertainment options.

Delivered in August by Chesapeake Shipbuilding, Salisbury, Md., American Melody is the fourth in the series of groundbreaking modern riverboats, with which Guilford, Conn.-headquartered American Cruise Lines is putting a new face on American river cruising.

Measuring 269 by 56 feet, American Melody brings its 175 passengers a whole new aesthetic, with an updated interior design that represents the latest evolution in the modern riverboat series. Specifically designed to navigate the Mississippi River, the vessel showcases a gorgeous multi-level sky-lit atrium, spacious indoor and outdoor lounges, a grand dining room as well as a casual outdoor café, a large fitness center, and a spectacular skywalk on the top deck which features an ellipse cutout dramatically cantilevered over the ship’s fourth deck.

The success of the modern riverboat series has led American Cruise Lines to bring some of the lessons learned across to its traditional paddlewheel fleet, all of which now carry the distinctive “American” branding in their names, The interiors will be remodeled with designs from Studio DADO, the Miami-based design firm commissioned to do the interiors for American’s newest modern riverboats in a project targeted for completion in time for American’s 2022 cruise season which operates March through December.