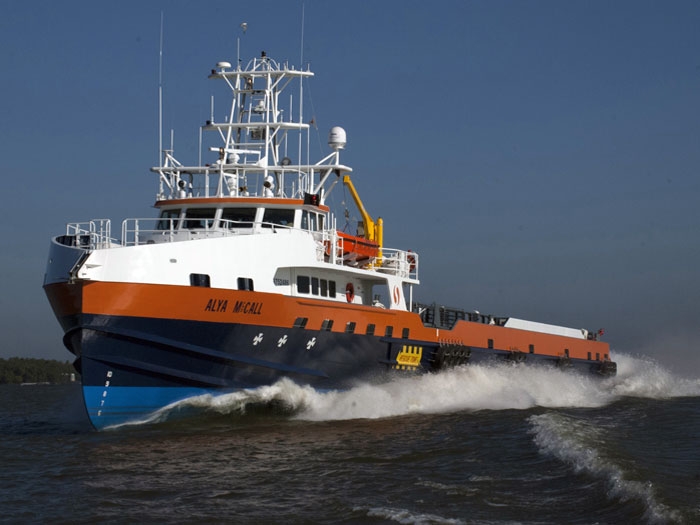 NOVEMBER 18, 2015—Aluminum boatbuilder Gulf Craft, LLC, Franklin, LA, has long been known as a leader in building high-speed fast supply boats and crewboats. Its latest delivery is the 206 ft x 33 ft Alya McCall, one of the “biggest, the most powerful and the fastest single-hulled, combination supply and crew boat to be launched to date,” according to engine supplier Cummins Marine.

“The boat is powered by five EPA Tier 3 certified QSK60-M propulsion engines rated at 2,680 hp each,” says Mike Aufdermauer, Marine Sales and Engineering Leader for Cummins Mid-South LLC, the engine supplier. “It is also equipped with three QSM11-DM auxiliary generator sets rated at 290 kW, during sea trials the vessel proved to be capable of running at 38 knots.”

Designed by Australia’s Incat Crowther, the Alya McCall has at least one sister ship to be built at Gulf Craft’s shipyard. As of November 16, the Alya McCall was nearing Malta in the Mediterranean on transit to Dubai for customer acceptance trials and will be on contract in Saudi Arabia later this year.