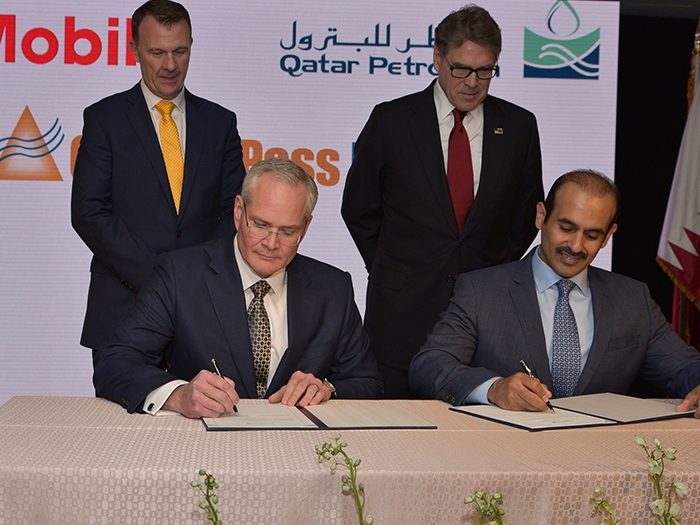 FEBRUARY 6, 2019 — There’s a reason why orders for LNG carriers are on the increase: Burgeoning U.S. LNG exports. And those export volumes are set to grow, ExxonMobil and partner Qatar Petroleum yesterday announced they had made a final investment decision (FID) to proceed with development of the $10 billion Golden Pass LNG export project located in Sabine Pass, Texas.

Qatar Petroleum will invest more than $8 billion and ExxonMobil more than $2 billion in the project.

The Department of Energy has authorized 23.05 billion cubic feet per day (235 billion cubic meters per year or 177 MTPA (million tons per annum) of LNG) of natural gas primarily spread across 10 large-scale export projects in Louisiana, Texas, Maryland, Georgia, and the Gulf of Mexico. Once completed, Golden Pass will be the seventh large scale LNG export project in the United States and be capable of exporting more than 2 billion cubic feet per day of U.S. LNG to any county not prohibited by U.S. law or policy.

“The project has some of the characteristics we believe are necessary for success: brownfield sites, proximity to diverse gas supplies, and strong financial backing,” says Barclays. “Like Shell’s LNG Canada, Golden Pass was approved without the backing of offtaker contracts, with ExxonMobil and Qatar Petroleum instead apparently adding the LNG volumes to their portfolios and relying on their own balance sheets to finance the project. This stands in contrast to many of the other proposed export projects, which are looking for support from end-users to finance construction. By self-financing the project, Golden Pass’s FID indicates Qatar Petroleum and ExxonMobil’s confidence in LNG demand growth over the longer term.”