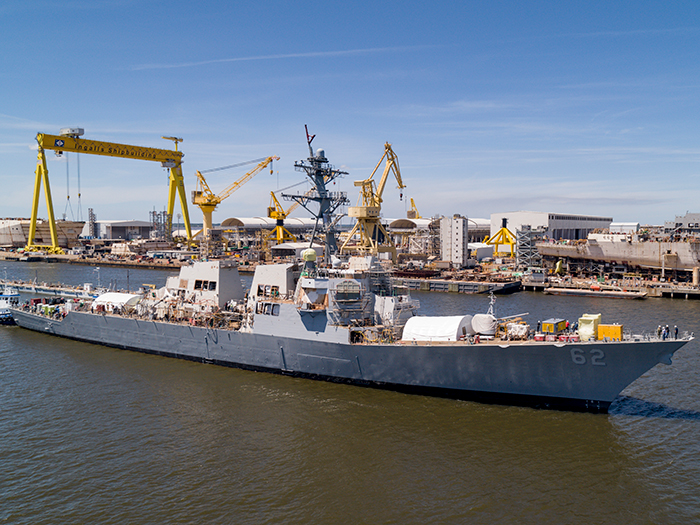 Naval Sea Systems Command reports that the guided-missile destroyer USS Fitzgerald (DDG 62) has taken another step toward returning to the fleet as a fully ready, combat-capable ship.

The ship achieved a milestone in its complex repair and restoration as it successfully launched and moored pier-side at Huntington Ingalls Industries (HII) – Ingalls Shipbuilding shipyard, in Pascagoula, Miss., April 16.

The ship arrived in Pascagoula on board a heavy lift ship on January 19, 2018, after sustaining extensive damage in a collision with the containership ACX Crystal on June 17, 2017.

Seven sailors lost their lives and the ship was damaged on the starboard side above and below the waterline.

Since the ship’s arrival at Ingalls, work has focused on restoring the integrity of the hull and topside structures that were damaged during the collision.

“The complexity of this overhaul has been challenging, but our planning team at Bath Iron Works and waterfront team at HII is executing repairs and installing upgrades so that Fitzgerald returns to our sailors lethal and mission-ready,” said Rear Adm. Jim Downey, deputy commander for surface warfare and commander, Navy Regional Maintenance Center. “We’re excited to have the ship back in the water where we can begin outfitting and testing efforts in support of getting the ship and crew back underway.”

These repairs range from partial to complete refurbishment of impacted spaces to replacement of equipment such as the radar and electronic warfare suite. The ship is also receiving HM&E, Combat System and C5I modernization upgrades.

Due to the extent and complexity of the restoration, both repair and new construction procedures are being used to accomplish the restoration and modernization efforts.

“This undocking is a step forward and brings us that much closer to getting Fitzgerald back out to sea – where the ship belongs,” said Cmdr. Garrett Miller, Fitzgerald’s commanding officer. “I’m proud of this crew’s hard work over the past year and look forward returning to the fleet with enhanced warfighting capability and lethality.”