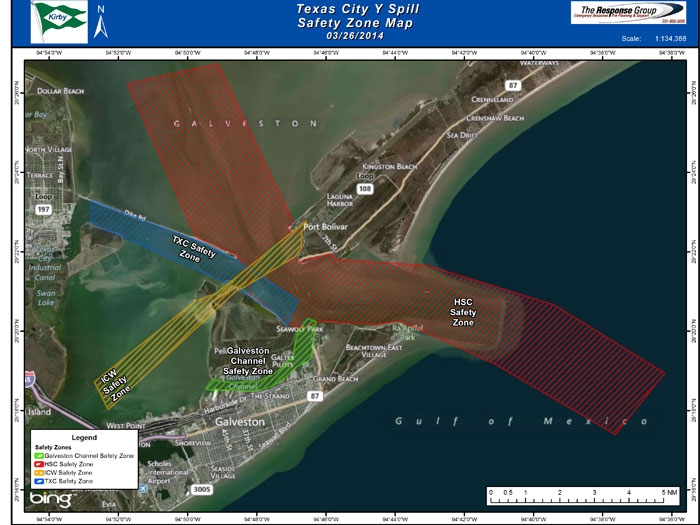 MARCH 26, 2014 — In its latest update on the response to the spill that closed the Houston Ship Channel earlier this week, the Unified Command says that the Coast Guard has been ramping up efforts to clean oil in the Ports of Texas City and Galveston Wednesday, as expected afternoon weather will likely hinder or halt operations due to safety concerns for responders.

Storms may keep responders from being able to safely collect oil on the water and along the shoreline. Response efforts will focus heavily on cleaning Pelican Island and north to the Texas City Dike until weather makes operations too hazardous for responders.

The weather is also expected to flush out pockets of oil that were unreachable to responders over the past few days. Once weather abates, responders will be re-assessing the area to update cleanup plans for immediate action.

Weather conditions Tuesday in the Ports of Texas City and Galveston pushed oil 12 miles out into the Gulf of Mexico, and into a southwesterly direction along the coast. The Unified Command has established a second Incident Command Post in Port O’Connor to prepare to protect the environment in the Matagorda area. Responders and equipment began arriving in the vicinity of Matagorda Tuesday, and will continue arriving throughout Wednesday. Protection tactics outlined in the area contingency plan are already being put in place.

At this time, volunteers for the incident will no longer be accepted and added to the mailing list. There is a database that currently includes a large number of volunteers that have been waiting patiently to volunteer, and will be utilized first. Once operational needs exhaust the list, new volunteers will be accepted.

Under Federal Law, only those individuals with special training and certifications are permitted to clean up oil, oiled debris or wildlife. These individuals are working under the Unified Command and have been assigned to those tasks accordingly. Those who do not hold the special training and certifications affiliated to this incident are not permitted to handle or collect oil, oiled debris or wildlife.

Air monitoring continues throughout the general area, although readings have consistently shown no reason for health concerns.

The Galveston Bolivar Ferry is scheduled to resume 24-hour operations. Travelers should be aware that oily conditions exist and they are encouraged to exercise caution and to pay attention to Texas Department of Transportation personnel’s instructions while boarding, riding and disembarking the ferry.

As a clarification for mariners, recreational boating and fishing is still open. Restrictions to mariners only pertain to the current safety zone.

To clarify earlier statements released by the Galveston County Health District and the Texas Department of State, the Unified Command has also amplified details for the safety zones and expectations for recreational vessels and commercial fishermen in and around the Houston/Galveston areas.

Recreational boating and fishing is still open, however general mariners are not allowed to operate in the safety zone without permission due to portions of Galveston Bay and offshore areas experiencing floating oil. They are advised to avoid sheen or floating oil outside the safety zone if encountered and to report it.

General mariners outside the safety zones have no restrictions on their movement or activities, but please avoid sheen and floating oil and report it if encountered.

Deep draft vessels will continue to coordinate movement through the Vessel Traffic Service.

General mariners are required to heed the following safety zones: