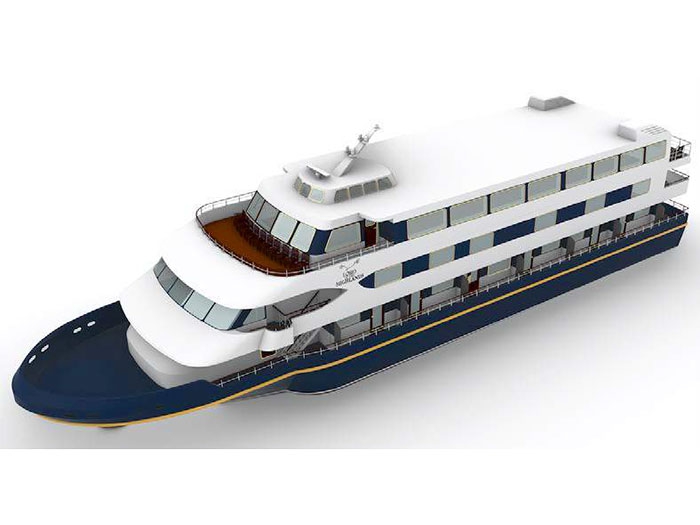 Vessel will be renamed Lord of the Highlands

OCTOBER 30, 2018 — Spanish naval architectural and marine design firm Oliver Design has signed a contract with the U.K.’s Magna Carta Steamship Company to carry out extensive alterations on a 2012-built Turkish-registered ferry that will fit it out to operate as a luxury cruise ship, tailored to service the Scottish lochs and coasts.

Under the turnkey contract signed in September, the ferry, the Necdet Ali Yildirim, has now been transferred to the northern Spanish port of Vigo, where it arrived October 22.

The two-deck vessel formerly operated on a seven kilometer route between the Turkish port of Çeşme and the Greek island of Chios.

The 42 m x 9 m vessel is now to be converted into a luxury vessel capable of housing 50 passengers on four decks and embarking on week-long voyages.

Necdet Ali Yildirim prior to conversion

To be renamed Lord of the Highlands and reregistered under the U.K. flag, the vessel’s new mission requires radical alterations to the design, including extensions to the length and beam, construction of an additional deck and complete refashioning of the interiors to house 50 passengers and a crew of 17.

Adapting the ship to its new mission is a highly complex task. Entirely new areas and services will have to be fitted out, including a restaurant, bar and lounge area, cabins for passengers and crew, a galley, etc. Additional stability will be achieved by adding one meter to the beam, lengthening the ship by two meters by fitting a new steel bow and adding greater height above the waterline.

Alongside engineering firm Insenaval, Oliver Design has taken charge of the technical aspects of the redesign, including plans of the new structure and design of stability and safety solutions. Oliver Design will also be responsible for obtaining certificates of compliance with international maritime regulations for the vessel’s new lay-out from Bureau Veritas and the U.K.’s MCA.

As the project manager, Oliver Design will head up planning and execution of the complex alterations, partnered by companies with specific specialities in the areas of steel, aluminum, pipes, electricity and carpentry.

Some of the work will be performed afloat. All drydock work will be carried out under Oliver Design’s supervision at the Astilleros Armada shipyards in Vigo.

In addition to the technical aspects of the design and outfitting in the shipyard, Oliver Design will also be responsible for creating interior design and decoration to the highest standards of a luxury cruise liner. This will include laying out new cabins and suites with balconies and crew’s quarters, and providing the furnishings, decorative elements, audio and video equipment and other complements in all areas. On the exterior, new railings, windows, skylights, hatches, and a retractable mast on the bridge will all have to be fitted.

In 2000, Oliver Design worked with the Magna Carta Steamship Company on a similar contract, rebuilding a 1985 ferry then operating on the Aegean to operate as a small format cruise liner providing tourist cruises in Scotland. That vessel, the Lord of the Glens, is 46 m in length by 10 m beam and has a GRT of 729 tonnes. It has four decks and can accommodate 54 passengers and 20 crew. Since the initial conversion work, Oliver Design also carried out rehabilitation and an upgrade in 2015.