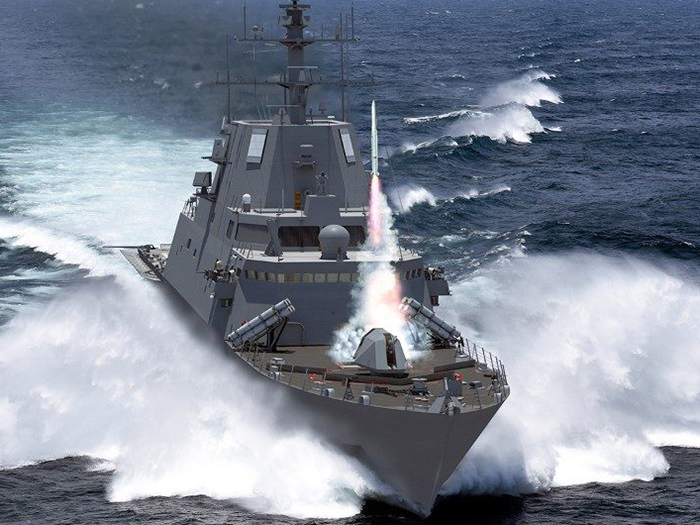 Lockheed Martin's frigate is based on the Freedom-variant LCS

Though that solicitation will be “under full and open competition,” it would be astonishing if the award did not go to one of the five shipbuilders awarded conceptual design phase contracts in February last year.

The conceptual design phase looks to have been fruitful.  In January 19 presentation to the Surface Navy Association by frigate program manager Program Executive Office Unmanned and Small Combatants, Regan Campbell, said that FFG(X) requirements are mature – informed by detailed analysis, early engagement with industry, and a collaborative conceptual design phase.

She also said that, coming down from an initial estimated $950 million a ship, the Navy is now “trending to very close to” its $800 million target price.

Both Austal and Lockheed Martin are offering designs based on their existing LCS designs. The Fincantieri Marinette Marine parent craft is the FREMM frigate, in service with the Italian Navy since 2012. The Bath Iron Works parent craft design is Spanish shipbuilder Navantia’s Álvaro de Bazán-class F100 Frigate.

Ingalls Shipbuilding has as yet released no details of its parent design. It is widely supposed that it will be based on the U.S. Coast Guard Legend class National Security Cutter. Dr. Campbell’s Surface Navy Association presentation, however, just used a graphic of the Ingalls’ logo to depict the ship,

The Navy expects to build a total of twenty FFG(X) ships in line with its FY 2019 Report to Congress on the Annual Long-Range Plan for Construction of Naval Vessels.

The presolicitation says that “Each offeror may submit only one proposal as a prime contractor. However, offerors may act as subcontractors under a prime contractor in one or more proposals.”
That gives Fincantieri Marinette Marine two bites at the cherry, either as prime contractor with its FREMM based design, or a shipbuilder for the Lockheed Martin ship.

The next step? “Prior to the issuance of the formal solicitation (request for proposals) for this procurement, NAVSEA intends to release a draft copy of the solicitation for industry review. Additionally, Program Executive Office, Unmanned and Small Combatants (PEO USC) will host an industry day event to present the Navy’s requirements and provide an overview of the solicitation, including the contemplated proposal evaluation procedures. The draft solicitation and industry day announcement will be released in or around March 2019 via the Federal Business Opportunities website (FBO).”