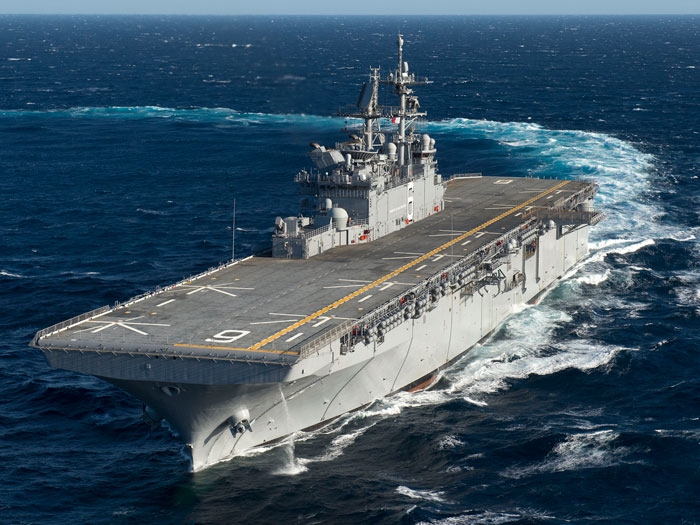 The Navy’s Program Executive Office, Ships, says that during the trials the Navy’s Board of Inspection and Survey (INSURV) performed rigorous tests and evaluated all of the ship’s major systems, including combat, propulsion, communications, navigation, mission systems and aviation capabilities. According to shipbuilder Huntington Ingalls, its test and trials team successfully demonstrated more than 220 test events.

“The ship performed extremely well,” said Capt. Chris Mercer, Amphibious Warfare program manager for PEO, Ships. “There were no major deficiencies identified. This marks a tremendous achievement for any ship, made only more impressive by America’s size, complexity and that the ship is the lead ship for the amphibious assault replacement program. We are very proud of this successful trial and look forward to America soon joining the fleet.”

The America class replaces the aging Tawara class, and is a modified repeat of the Wasp class, optimized for aviation and capable of supporting current and future aircraft capabilities such as the tilt-rotor MV-22 and the Joint Strike Fighter. The ship’s aviation-centric design includes space for an enlarged hangar deck with increased aviation parts stowage capacity, expanded aviation maintenance facilities and increased aviation fuel capacity.

LHA 6 is 844 feet in length, reaches speeds of over 20 knots and displaces 44,971 tons. The ships in this class will accommodate a crew of 1,059 (65 officers) and 1,687 troops. The America-class will be capable of carrying a Marine Expeditionary Unit, including Marine helicopters, MV‐22 Osprey tiltrotor aircraft and F‐35B Joint Strike Fighter aircraft.

With delivery planned for spring 2014, the future USS America will support a wide spectrum of military operations and missions, including forward presence and power projection as an integral  part of joint, interagency and multinational maritime expeditionary forces, maritime security and humanitarian and crisis response.

“It was a proud three days at sea, and America proved she is a quality ship,” said LHA 6 Program Manager George Jones. “The LHA 6 team’s tireless and diligent effort paid off as our scores from INSURV indicated. We will continue this effort over the next several weeks to have LHA 6 ready for the sailors and Marines who will man her as part of the U.S. Navy fleet.”

“The Ingalls/Navy team did an outstanding job in presenting the ship to the Board of Inspection and Survey,” said Richard Schenk, Ingalls’ vice president, test and trials. “It is a tribute to all involved in proving the capabilities of such a large and complex ship.”

When America enters the fleet, she will be the flagship of an Expeditionary Strike Group, strategically positioning Marine Expeditionary Units ashore across a full spectrum of missions, including humanitarian, disaster relief, maritime security, antipiracy and other operations while providing air support for ground forces.