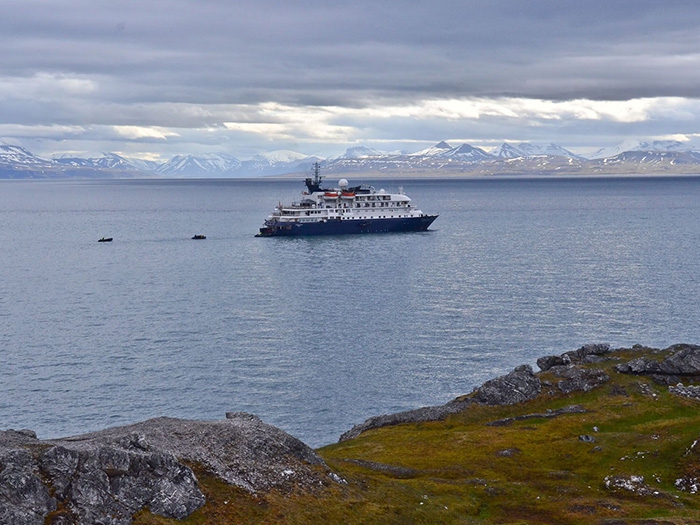 OCTOBER 3, 2017 — Two Finnish companies, Fleetrange and KNL Networks, say they are the first in the world to provide Arctic maritime situational awareness, IoT and communications using technology independent of satellites.

A successful trial of the two companies’ combined “Fleetrange with KNL” solution has successfully been completed onboard Salén Ship Management’s luxury expedition cruise ship Hebridean Sky during her Arctic season around Svalbard.

The trial included the Fleetrange IoT cloud platform which uses KNL’s long-range – up to 10,000 km – 3G/HF hybrid communications technology to provide Arctic situational awareness between the ship and shore side office as well as sustaining operational email communications for the Captain.

Dindo L.Talon, IT Officer of M/S Hebridean Sky, said: “Fleetrange and KNL has always been a big help on our entire stay in Svalbard, especially on those areas that we don’t get any signal at all with the VSAT, by receiving the updated Ice Charts and Weather Forecasts in GRIB files, it truly helped us. I am impressed with how useful the HF email is when nothing else is available to connect and contact from the head office, supports, etc. And it enabled us to send reports despite the loss connection on our VSAT.”

The “Fleetrange with KNL” solution is based on a combination of IoT and Cloud technology, where the ship sends IoT data, such as location, surrounding AIS-traffic and motion, and receives up-to-date weather and ice data from shore using KNL’s 3G/HF hybrid communications technology.

KNL’s technology is based on an automated cognitive mesh-type radio network, where ships within 3G coverage act as base stations for ships further out at sea at distances of up to 10,000 km. KNL technology is completely independent from communication satellites and offers a cost-efficient, global and cyber secure channel for email and IoT data.

The trial was conducted during Hebridean Sky’s Arctic season 2017. The ship was fitted with KNL’s patented cognitive and software defined radio equipment and Fleetrange IoT units. The Fleetrange cloud-based situational awareness solution was used to deliver up-to-date weather data and ice charts automatically to the ship and receiving IoT sensor data from the ship. The communication and awareness solution was systematically tested and monitored during the trial, which took the ship around Svalbard and all the way to the Arctic ice edge.

“Ships in the Northern Arctic waters have been relying on non-existent or lower quality and expensive digital satellite communications for a long time,” says Henrik Ramm-Schmidt, CEO andfounder of Fleetrange Ltd. “It is truly amazing for us to be able to change this and be the pioneers with KNL in providing high availability digital communications and situational awareness solutions for these harsh waters,” –

“At KNL our mission is to free the maritime industry from connectivity constraints, and this trial with Hebridean Sky is a great example of fulfilling that vision” says Toni Lindén, CEO and Founder of KNL Networks. “Together with Fleetrange, we’re proud to have provided the key link of communication and content where satellite is unavailable.”