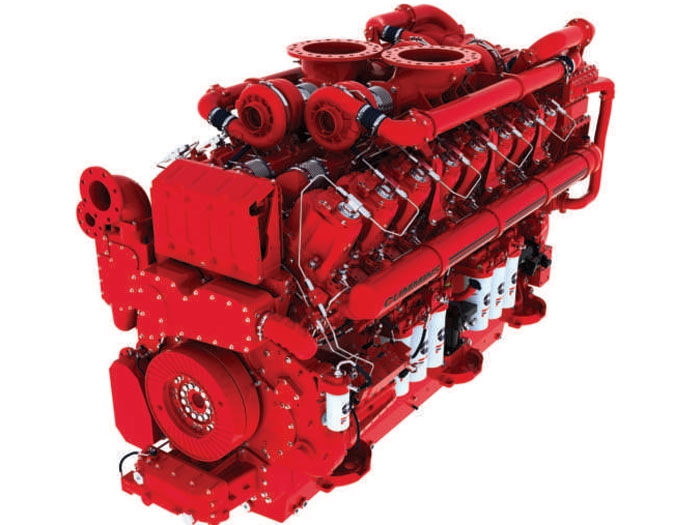 Currently, Cummins offers propulsion and auxiliary power solutions from 75 kW to 2,013 kW (100-2,700 hp) and generator sets from four to 1,240 kWe, designed specifically for the challenges of marine applications. The launch of the QSK95 – Cummins newest, largest and most powerful engine to-date – will increase the company’s marine power range by 50 percent.

At launch, the QSK95 will meet IMO Tier II emissions standards with highly efficient fuel injection and clean combustion. The engine is manufactured at the Seymour Engine Plant in Seymour, IN, and will begin limited production in 2017.

With engineering work now complete on the marine configuration, Cummins is ready to share more details of the features that distinguish the QSK95 from medium-speed engines offering similar power output.

Cummins says that the QSK95 offers the benefits of smaller size, lower weight and better transient response while delivering a new level of serviceability.

With ratings from 2,386 kW to 3,132 kW (3200-4200 hp), the QSK95 achieves a power output previously available only from larger medium-speed marine engines, while bringing the advantages of a lower capital cost and a more compact installation.

The QSK95 provides 95 liters of displacement in a 78-liter package. Nested cylinders and a 60-degree vee enable a short, narrow engine block relative to other engines of comparable displacement. Even with the compact package size, the QSK95 provides best-in-class power density. In addition, the QSK95 weighs in just over 13,000 kg (28,660 lb) – this is between 25 percent and 70 percent less than medium-speed platforms of similar power output.

As operators continue to seek better vessel maneuverability, the QSK95 delivers faster transient response through a unique turbo arrangement and a dry system. By using one turbo per four cylinders, the QSK95 is able to utilize a small turbo model. The dry turbo housings and dry exhaust manifold maximize the available energy to the turbos, allowing them to spool up quickly, resulting in fast engine response.

Cummins says that its design, validation and service teams devoted countless hours to ensuring that the QSK95 sets industry serviceability standards. From the early phases of engine design, qualified technicians participated in service tool and procedure validation, evaluating for safety, ergonomics, durability, reliability and repair quality robustness, and to reduce the cost and time of repairs. Design concepts were also evaluated for progressive damage prevention.

Initial feedback from technicians servicing QSK95 engines in the field has confirmed that the focus on serviceability will provide considerable payback over the life of the engines.

Like all Cummins marine products, the QSK95 is supported by Cummins global distributor and dealer network