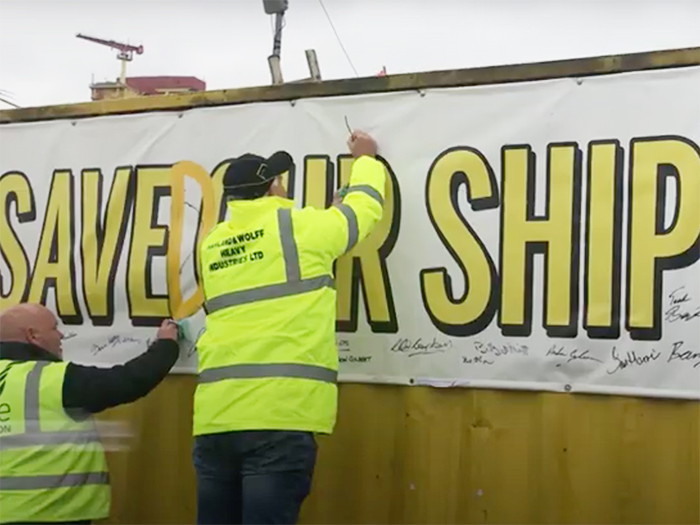 The Northern Ireland shipyard best known for building the Titanic looks to have a new future ahead — fabricating components for a giant gas storage project and potentially for a proposed FSRU that would be the first in the U.K.

InfraStrata plc (AIM: INFA), a London-listed company focused on strategic infrastructure project said yesterday that it had reached a preliminary agreement to purchase the principal assets of Harland and Wolff Heavy Industries Limited and Harland and Wolff Group Plc (the “Assets”) from administrator BDO NI for a total consideration of £6 million (about $7.35 million).

In a regulatory filing, InfraStrata, noted that the assets consist of a multi-purpose fabrication facility, quaysides and docking facilities (the “Facility”) in the port of Belfast, Northern Ireland, “ideally suited for the energy infrastructure industry and the company’s projects.”

According to InfraStrata, the acquisition will allow it to bring in house a large part of the fabrication requirements for its] Islandmagee gas storage project and proposed FSRU project.

In what was good news to Harland & Wolff workers who had been occupying the shipyard for nine weeks, InfraStrata said that all of
the 79 employees who did not opt for voluntary redundancy earlier in the year will be retained immediately.

Following completion of the acquisition, the InfraStrata Board plans to significantly increase the size of the workforce by several hundred over the next five years as it progresses the development of its infrastructure projects.

A new management team for the facility is anticipated to be employed by the end of 2019 in addition to bringing on-board the experience of those employees who were previously employed.

The filing notes that “the highly skilled workforce presents the company with an opportunity to create secondary revenue streams through the
provision of services to the energy, maritime and defense sectors should such opportunities arise in future.”

The devil being in the details, you can see how Infrastrata intends to pay for the acquisition and when it will close by downloading the regulatory filing HERE