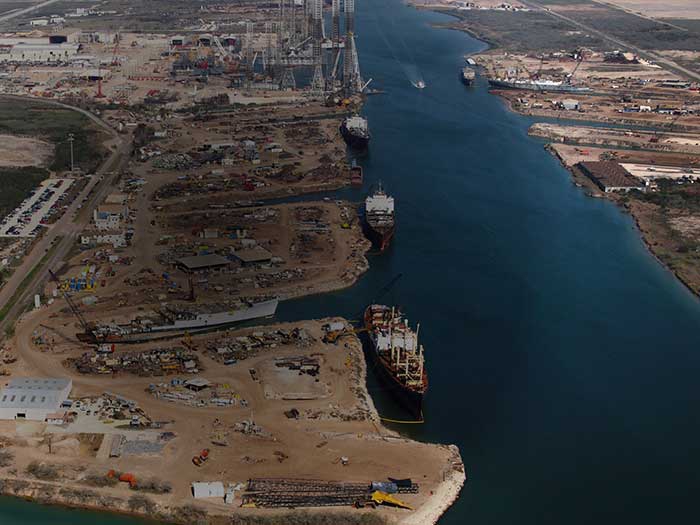 MAY 2, 2017 – The Brownsville, Texas, ship recycling and scrap processing facility formerly known as ESCO Marine is reopening under new ownership.

Hilco and MCM have formed a joint venture company under the name SteelCoast (www.steelcoastus.com) with a new management and operations team to begin running the business immediately.

Hilco Redevelopment Partners EVP and SteelCoast Board Member, Roberto Perez said, “Putting a deal together to acquire and relaunch this unique ship recycling and scrap processing business was complex, especially given the nature of the assets and our goal of maintaining key U.S. Government client relationships. Following a lengthy diligence process, we are confident that SteelCoast has a very substantial growth path.”

Rob Mardigian, CEO of MCM and SteelCoast Board Member, said, “Hilco and MCM have become very proficient at identifying new opportunities for industrial facilities that many have viewed as too challenging to tackle.”

SteelCoast will be one of the largest and most technologically advanced reclamation, remediation and recycling operations in North]America. The Brownsville, Texas facility, which has already undergone over one million dollars in renovations and improvements, will provide a complete end to end solution including recycling of large oceangoing vessels (both military and non-military) from around the world. SteelCoast will also dismantle decommissioned, idled or underutilized oil rigs, train locomotives, railcars, as well as other industrial and commercial sources of recyclable metals.

Additionally, SteelCoast will process automobiles and other light metal products in its 4500 HP shredder. These types of reclamation and recycling projects allow for the scrap processing of both ferrous and non-ferrous metals during the dismantling process.

SteelCoast will then work to process and resell the scrap to be used in various other manufacturing industries.

Hilco and MCM have installed Mr. Kris Wood as CEO at SteelCoast and is in the process of adding an experienced operations and management team.

Working with Mr. Wood over a number of months, SteelCoast has developed a detailed business plan which includes an investment in sales support to build upon its client base, which includes contracts with the U.S. Navy and marketing and reselling of the recycled materials. SteelCoast also has immediate plans to invest millions of dollars more into the infrastructure, berths, technology and equipment to ensure the facility is a leading state of the art, world class ship recycling and scrap processing facility.

Mr. Wood has considerable experience within the ship recycling and scrap processing industry. A lifelong South Texas resident, he worked at the former company for over 12 years, adding new management responsibilities throughout his career.

Mr. Wood has led several key team projects over the years including oversight of key U.S. Navy and MARAD initiatives.

Mr. Wood said, “I understand that building a hardworking and trusted employee base is vital. I’m excited that SteelCoast will bring back hundreds of jobs to the community which knows this business well.”

The company indicated that it would have approximately 130 employees by the end of May 2017, with plans to hire 80 – 90 more in the coming months.

Mr. Eduardo A. Campirano, Port Director & CEO of the Port of Brownsville said, “We couldn’t be more pleased that Hilco and MCM will open its recycling facility and get business going again at SteelCoast.”