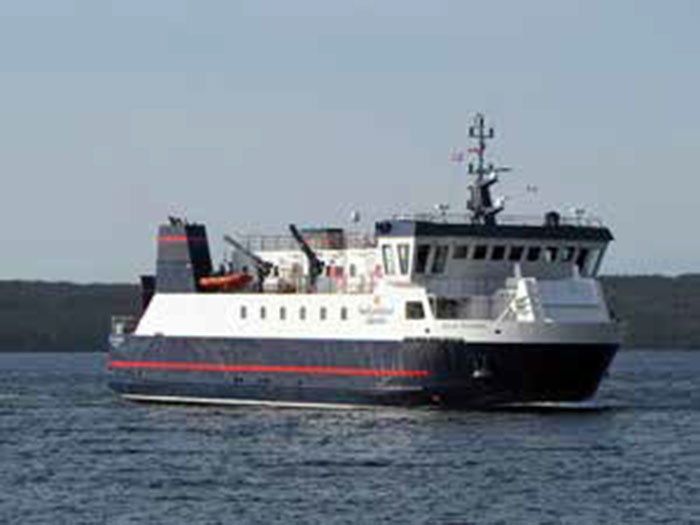 MAY 6, 2016 —An investigation report (M15A0009) released by the Transportation Safety Board of Canada (TSB) today concludes that the 38.45 m passenger ferry Grace Sparkes, operated by the Newfoundland Department of Transportation and Works, struck Burnside Rock, Burnside, Labrador, because the bridge team of the roll-on roll-off ferry was unaware of the vessel’s position in the harbor channel due to insufficient monitoring of the vessel’s navigation.

There were no injuries or pollution, but the vessel sustained damage to the hull and the bilge keel.
On January 21, 2015, at 1746 local time, the Grace Sparkes was voyaging with eight crew and four passengers onboard along a route that deviated to the east-southeast of the course line specified in the standard passage plan.

The master was steering the vessel and navigating, limiting his ability to use paper and electronic charts to monitor the vessel’s position in relation to the planned route. ‘

Although the master navigated visually at night, the position of the vessel was not being cross-referenced by the bridge team using other navigational aids as was recommended by the company’s safety management manual. After the striking, the vessel continued its voyage and docked at Burnside a few minutes later.

In addition to not cross-referencing navigational aids, the investigation found deficiencies in several areas. These included a delay in reporting the occurrence to the Canadian Coast Guard; a lack of crew training in bridge resource management; issues with the marine medical certification process for the master, and assessing fitness for duty; and a lack of signage for lifesaving equipment.

Further, when the vessel struck the rock, the passengers and crew members were not properly informed. It was also determined that safety drills included only crew members and no passengers, and thus did not provide realistic training.

The investigation also identified a number of issues related to items on the TSB Watchlist: the operator’s safety management system and Transport Canada’s (TC) oversight.

If TC oversight does not assess the effectiveness for passenger safety-related emergency procedures, says the Transportation Safety Board there is a risk these will not achieve their intended purpose. Additionally, if there is no follow-up to verify that non-conformities raised during internal and external audits have been addressed, there is a risk that unsafe conditions may persist.

As is usual, the full report contains a litany of other issues exposed by the TSB invesigation beyond those mentioned in the summary.