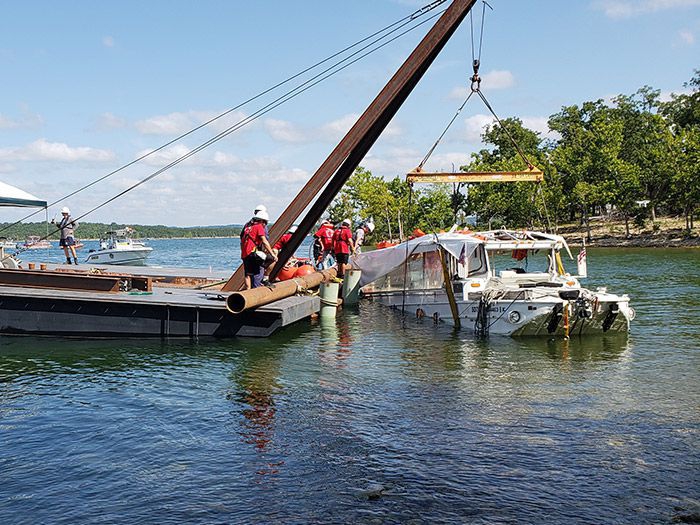 NOVEMBER 8, 2018 — The U.S. Attorney’s Office for the Western District of Missouri reports that a federal grand jury has indicted Kenneth Scott McKee, 51, of Verona, Mo., the captain of the duck boat that sank at Table Rock Lake July 19, resulting in the deaths of 17 people.

McKee, 51, of Verona, Mo., was charged in a 17-count indictment returned by a federal grand jury in Springfield, Mo. McKee was the captain of Stretch Duck 7, operated by Ripley Entertainment, Inc. The company operated duck boat tours in Branson, Mo., and on Table Rock Lake and Lake Taneycomo.

The indictment charges McKee with misconduct, negligence, or inattention to duty by a ship’s officer, resulting in the death of another person. McKee is charged with one count for each of the 17 passengers (including one crew member) who died when Stretch Duck 7 sank.

The indictment alleges that McKee committed a number of acts of misconduct, negligence, and inattention to his duties while piloting Stretch Duck 7 both before and during severe weather conditions.

McKee allegedly operated Stretch Duck 7 in violation of the conditions and limitations specified in the vessels’ certificate of inspection. When severe weather (including increased wind speed) arrived at the vessel’s location, the indictment says, McKee failed to instruct passengers to don personal flotation devices. He allegedly also failed to immediately increase speed and head to the nearest shore. He allegedly caused or allowed the vessel’s plastic side curtains to be lowered, which created a barrier over the vessel’s exits in the event of a need to abandon ship.

The indictment alleges that these acts of misconduct, negligence, and inattention to duty separately and collectively caused the lives of 17 persons on board Stretch Duck 7 to be lost.

Under federal statutes, a conviction for this offense is subject to a sentence of up to 10 years in federal prison without parole on each count of conviction, plus a fine of $250,000

“Our entire community was shocked and saddened by the loss of 17 lives in this tragic event last summer,” U.S. Attorney Tim Garrison said. “Today’s indictment alleges that the misconduct, negligence and inattention to duty by the ship’s captain caused or contributed to the loss of those lives.

“This remains an active and ongoing investigation,” Garrison added. “To better enable our office in its urgent pursuit of justice through this investigation, we have requested various courts presiding over the related civil lawsuits to allow our intervention and stay certain manners of discovery to prohibit those lawsuits from impeding or jeopardizing our work. Today’s indictment illustrates the urgency our investigative team has shown in its pursuit so as not to unnecessarily burden other legal avenues utilized by victims.”