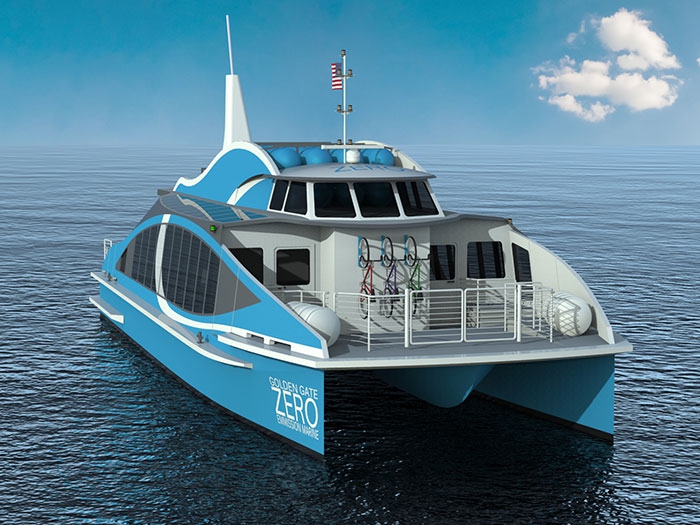 NOVEMBER 8, 2018 — The Bay Ship & Yacht Co. shipyard in Alameda, CA, has laid the keel of America’s first zero emission ferry, the Water-Go-Round. The 70 ft Incat Crowther designed ferry is being built for Golden Gate Zero Emission Marine (GGZEM) to showcase the advantages of hydrogen fuel cells for the commercial maritime industry. Construction is expected to be complete by September 2019.

The ferry is named Water-Go-Round as a reference to the cyclical nature of how the technology it will use works. Simply put, hydrogen can be created from water and after being used in a fuel cell, becomes water again. Since water is the only byproduct of the power system, adoption of this technology for shipping promises drastic reductions of pollutants and greenhouse gases.

“Today’s ceremony symbolizes more than the start of construction of a single vessel, it marks the start of a new movement in the maritime community,” said GGZEM CEO Dr. Joseph W. Pratt. “Operators all over the world are seeing that hydrogen fuel cell electric drivetrains can provide both environmental and economic advantages. Golden Gate Zero Emission Marine and our partners are proud to be selected by California to showcase this aboard the Water-Go-Round.”

The vessel is being built with the help of a CARB (California Air Resources Board) grant funded by California Climate Investments, a statewide program that puts billions of cap-and-trade dollars to work reducing greenhouse gas emissions.The Bay Area Air Quality Management District (BAAQMD) is administering the project.

“The Air District is excited to be part of the team for the first zero emission, hydrogen fuel-cell powered ferry project in the nation,” said Jack Broadbent, executive officer for the Bay Area Air Quality Management District. “By demonstrating cutting-edge, diesel- free technology, we can showcase the benefits of these cleaner solutions which will protect public health and the environment while reducing air pollution and reliance on fossil fuel.”

As we reported earlier (see story), the catamaran is powered by dual 300 kW electric motors using independent electric drivetrains from BAE Systems. Power is generated by 360 kW of Hydrogenics proton exchange membrane fuel cells and Li-ion battery packs. Hydrogen tanks from Hexagon Composites, with valves and hardware from OMB-Saleri, will be installed on the upper deck, and contain enough hydrogen to go up to two days between refuelings. GGZEM’s “zero infrastructure” flexible fueling arrangement allows the Water-Go-Round to be fueled anywhere with truck access.

Once the Water-Go-Round is launched it will be operated for three months in San Francisco Bay, to enable Sandia National Laboratories to independently assess performance and gather data for CARB to determine marine suitability of the technology. Additionally, partners will be gathering feedback from operators and passengers to determine best commercial use of the vessel.

Red and White Fleet intends to use the Water-Go-Round as the first of several vessels with GGZEM technology in order to meet it scommitment to a build a 100% zero emission fleet by 2025.

Tom Escher, President of Red and White Fleet said: “The technology for zero pollution is here today and we are honored to be the operator of the Water-Go-Round. I’m convinced it will prove the feasibility of hydrogen fuel cell application on all maritime vessels. The Water-Go-Round is a ‘seed’ and when one puts a ‘seed’ in water, it grows. This growth will include large ferries, crew boats, fishing boats, supply vessels, tugboats and large ocean container ships. The Water-Go-Round is the beginning of the shift from hydrocarbon maritime fuels to zero pollution hydrogen fuels. California is going to prove to the global shipping community that hydrogen fuel cells offer zero pollution for the benefit of the entire world.”

[…] we reported earlier (see story), the 84-passenger hydrogen fuel cell powered ferry is currently under construction at the Bay Ship […]