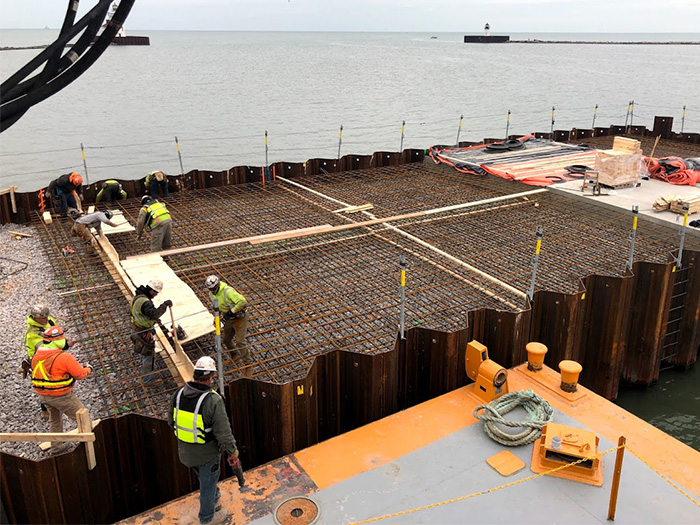 The Buffalo Engineer District is making more than $16 million in upgrades to the breakwaters that protect critical infrastructure in Cleveland Harbor.

As part of multiple projects, repairs and extensions are being made to portions of the more than five-mile-long structure that allows for navigation between the City of Cleveland and Lake Erie. This ensures the harbor’s ongoing value to the local and national economy.

Work on the Cleveland West Breakwater began in July 2020 and was completed in December 16 by the Buffalo District and its contractor Kokosing Industrial, Inc. The $6.47 million project consisted of constructing 390 linear feet of parallel steel sheet pile walls along the west breakwater.

An additional $8.152 million contract was awarded to Dean Marine & Excavating Inc. in September 2021 for repairs to the apron and parapet of another section of the Cleveland West Breakwater. This project will include construction of approximately 204 linear feet of steel sheet pile wall, removal of approximately 1,824 linear feet of concrete, and casting of approximately 4,812 cubic yards of reinforced concrete cap along the breakwater structure. Construction is expected to begin July 1, 2022 and last five and a half months.

These projects are 100% federally funded under operations and maintenance authorization from the River and Harbor Acts and Water Resources Development Acts.

In 2019, Cleveland Harbor handled 11.9 million tons of cargo, including iron ore (58%), limestone (21%) and cement and concrete (7%). Waterborne transportation facilitated by the harbor supports $545.7 million in business revenue, 2,391 direct, indirect and induced jobs, and $183.8 million in labor income to the national transportation sector.