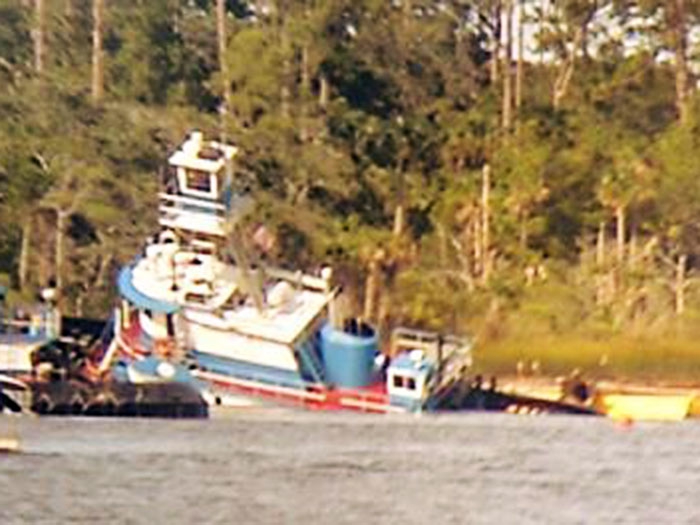 Atlantic Raider aground on the shallows of the west side of the Blount Island Channel: Vessel's port quarter is under water up to the lower wheelhouse deck

FEBRUARY 2, 2018 — The National Transportation Safety Board has issued a report on an October 26, 2016, incident in which the 1967-built Gore Marine Transportation Co. towing vessel Atlantic Raider grounded in the Blount Island Channel of the St. Johns River near Jacksonville, FL.

According to the NTSB report, at 1530 local time the vessel “suddenly listed to port. Efforts to correct the list were ineffective; the list increased, water began to flood into the engine room, and the crew chose to intentionally ground the vessel. All three crew members disembarked safely. An oil sheen could be seen extending from the vessel. Damage was estimated between $800,000 and $1,200,000.”

On the morning of the accident, the vessel Atlantic Raider loaded 10,000 gallons of fuel and topped off its potable water tank at the NuStar Energy Terminal near Talleyrand, FL, and then got under way about 1030 for its dredge assist job site in the Blount Island Channel, about 8 miles up the St. Johns River.

“About 1530, while at its staging area preparing to lay pipe for dredging, the Atlantic Raider began listing to port. The captain told investigators that the source of the list was not known. He and the deckhand went to the engine room, observed no sign of flooding there, started the main engines, and tried to correct the list by shifting fuel, without success. Water covered the stern and eventually began to flood the lower engine room through an open door on the vessel’s port side, aft on the maindeck. The crew then closed the door, took in mooring lines from a raft of dredge pipe, and maneuvered the Atlantic Raider into nearby shallow water to prevent it from sinking in the middle of the navigable waterway. The port list increased as the crew turned the vessel to starboard in the direction of the west side of the channel.”

Subsequently, on November 30, the Atlantic Raider was drydocked. A horizontal hull fracture 9.5 inches long and 0.5 inches wide was found on the vessel’s stern at a weld seam, about 10.5 feet above the keel. The vessel’s rudder compartment was on the inboard side of the stern hull fracture. A 1-inch hole and two pinholes were also discovered on the corroded bulkhead leading into fuel tank no. 4.

The NTSB report says that, according to a company representative, the Atlantic Raider did not normally have 26,000 gallons of fuel on board as it did the morning of the accident. At that condition, the draft of the vessel would have been deeper than normal―about 10.5 feet―putting the hull fracture at the waterline. Water likely entered the rudder compartment through the hull fracture and increased the draft by the stern, which would have caused the flooding rate to increase. About five hours later, the vessel began to sink by the port quarter.

The NTSB determines that the probable cause of the flooding of the Atlantic Raider was a stern hull fracture that allowed ingress of water into the rudder compartment and caused the vessel to sink by the port quarter. Contributing to the accident was flooding through an open door to the engine room.