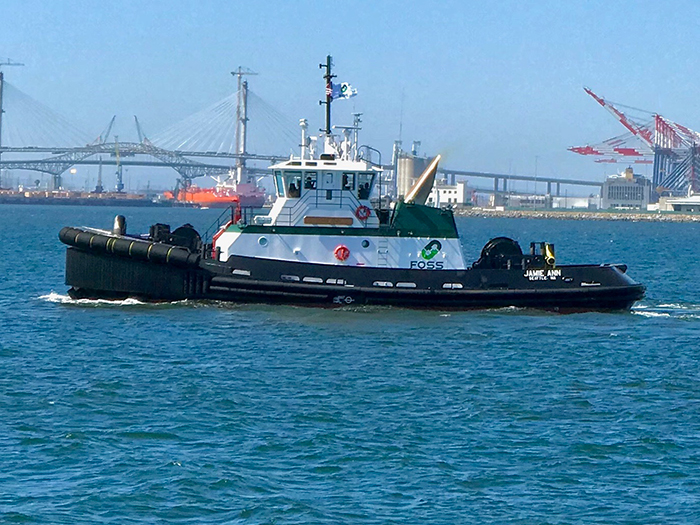 First vessel in the series. M/V Jame Anne (above) joined the Foss fleet in April 2020.

Set to join the Foss Maritime fleet later this month, the M/V Rachael Allen was launched by Nichols Brothers Boat Builders (NBBB), Freeland, Wash., on April 29. The vessel is the final tractor tug in a series of four ASD-90 class tugs ordered from the shipyard by the Saltchuk Group.

NBBB reports that it continues to invest in upgrading and improving its haul and launch equipment and used airbags for added buoyancy to assist in the launch of the M/V Rachael Allen. This allowed for the tug to float off the launch cradle seamlessly before high-tide.

Foss welcomed the first two vessels in the series, M/V Jamie Ann and M/V Leisa Florence, into its fleet in April 2020 and January 2021 respectively, while sister Saltchuk subsidiary AmNav Maritime welcomed the M/V Sarah Avrick in September 2020. The M/V Rachael Allen will join the fleet in May after final outfitting and trials are completed at NBBB’s outfitting Pier in Langley, Wash.

“The launch of every vessel is a special moment in its construction, bringing the boat into it’s natural environment,” said NBBB CEO Gavin Higgins. “We are very proud of the opportunity Foss has given us with this series of tugs. The team have worked very hard to complete all four vessels in these difficult and challenging times.”