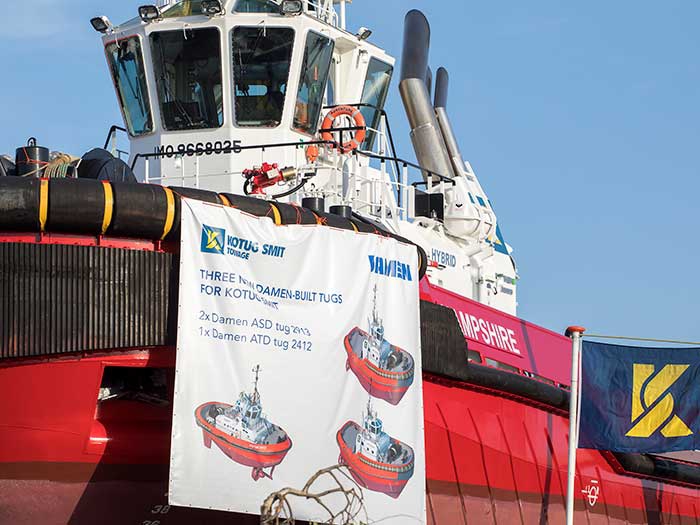 The order is for two ASD Tugs 2913 and an ATD Tug 2412 Twin Fin and will bring the total number of Damen-built tugs operating in Kotug Smit’s fleet of 69 to 22.

The order was announced as Kotug Smit Towage commenced a charter of a Damen-built ASD 2810 Hybrid tug, which was renamed Hampshire during Kotug Smit’s annual “Herring with Friends Party” in Rotterdam, a traditional Dutch event to mark the beginning of the herring season.

The ASD 2913 is known for its maneuverability and environmentally efficient performance and delivers 80 tonne bollard pull. Damen has outfitted one of the two new Kotug Smit 2913 vessels with a fire-fighting system.

Kotug Smit Towage CEO René Raaijmakers said: “We are delighted to be supporting our growth in the U.K. with the addition of three new tugs to our fleet. These Damen tugs were selected for their high performance and short delivery time and will fit perfectly into our European harbor towage operations, especially given their commonality with the tugs we are currently operating.”

Damen’s Area Director Benelux, Mijndert Wiesenekker said: “We are very pleased to be delivering these vessels to Kotug Smit and continuing to help them in their sustained growth and development. Thanks to Damen’s standardized shipbuilding philosophy two of the vessels had already been constructed as stock vessels, ensuring Kotug Smit of the fastest possible delivery time.”