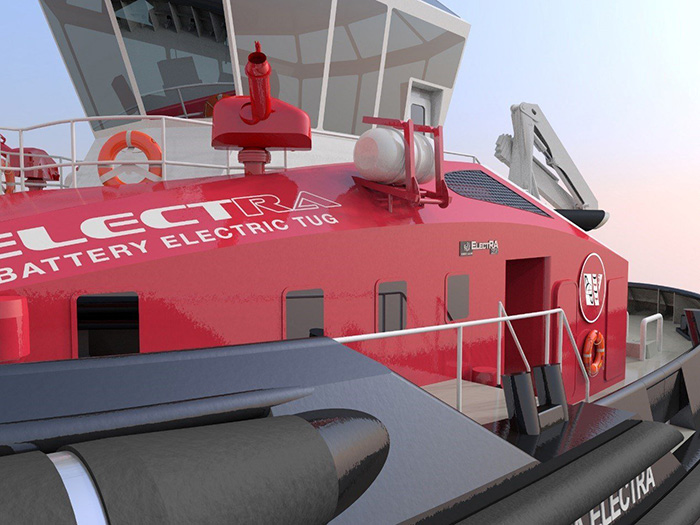 HaiSea Marine, a partnership formed between Canada’s Haisla Nation and North Vancouver, B.C.-based Seaspan ULC, has won a major contract with LNG Canada to build and operate escort tugs and harbor tugs required for its export facility in Kitimat, B.C.

The contract will see HaiSea Marine will provide ship-assist and escort services to LNG carriers navigating Douglas Channel and approaches in Kitimat Harbour. The neighboring Gitxaala Nation and Gitga’at Nation will also benefit from the project.

The escort and harbor tugboats are being designed by Vancouver-based naval architects and marine engineers Robert Allan Ltd. (RAL) and feature leading edge technology. The harbor tugs will be battery electric powered, while the larger escort tugs will be LNG dual-fueled.

At 28 meters in length, with approximately 70 tonnes bollard pull and 5,240 kWh of battery capacity each, the first-of-class ElectRA 2800 battery-electric harbor tugs will perform the majority of their ship-berthing and unberthing missions on battery power. Bollard pull is primarily used for measuring the strength of tugboats, with most commercial harbor tugs having around 60 to 65 tonnes-force.

With ample clean hydroelectric power available in Kitimat, the harbor tugs will be able to recharge from dedicated shore charging facilities at their berths between jobs, effectively reducing emissions to near-zero. Because of their battery propulsion, they are also expected to be exceptionally quiet, both onboard and underwater.

LNG Canada say the larger RAstar 4000 DF vessels will be the most powerful Azimuth Stern Drive (ASD) escort tugs on Canada’s west coast, and will rank among the world’s highest-performing escort tugs.

At 40 meters in length and with over 95 tonnes of bollard pull, they will generate indirect forces of approximately 200 tonnes.

The RAstar 4000 DF escort tugs will perform the majority of their missions using natural gas as their primary fuel. This allows major emissions reductions compared to conventional diesel tugs of the same power, in compliance with the most stringent emissions standards in the international marine industry.

In addition to these environmental benchmarks, the escort tugs will be capable of pollution response/oil spill recovery, fire fighting of marine terminal fires, person overboard response, and emergency towage of vessels.

“As majority owner of HaiSea Marine, we’re excited about the opportunities Haisla members will have working locally in the marine industry,” says Crystal Smith, Chief Councillor of the Haisla Nation. “It’s extremely important to us that aside from being one of the most powerful tug fleets on the west coast, it will also be one of the greenest ever assembled, anywhere.”

HaiSea’s Senior Project Manager, Captain Jordan Pechie, says the new partnership is a perfect fit. “Seaspan and the Haisla have hundreds of years of combined experience in these waterways,” he notes. “Our mandate is to operate at the highest level of safety and environmental standards, which will allow this legacy to thrive for generations to come.”

RAL President and CEO Mike Fitzpatrick also welcomes the opportunity to work with the Haisla Nation, noting that his firm already has a long-standing relationship with Seaspan. “We value highly the many quality shipyards with whom we have forged close working relationships over many years, and who have helped immeasurably to demonstrate the quality of our brand,” he says.

The new tugs will arrive well in time for LNG Canada’s first cargo at mid-decade.